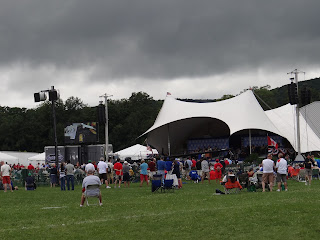 My parade post yesterday concluded the activities we did last Saturday.  Sunday, we had reserved for the Hall of Fame induction ceremony.  With an ominous forecast, we took our seats in the grass at the Clark Sports Center about an hour before the scheduled start time, only to learn that the beginning of the ceremony was to be delayed due to passing showers.  We (Me, Drew, Drew's dad, Chris and my brother Adam) each took turns hanging at our area while some of us would go eat, look at souvenirs, walk around, etc.  Soon, it began to rain... and rain... and rain.  We had to take cover under one of the tents near where we had set up.  Our folding chairs and the blanket we brought were soaked.  Finally, the rain let up and they began the induction. 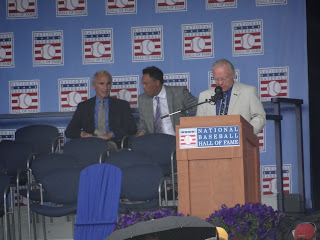 They began with the customary introduction of the Hall of Famers present for the ceremony.  Present were Sandy Koufax (he wasn't in the parade) and Roberto Alomar (both shown above), Bob Gibson (not in the parade), Rollie Fingers (not in the parade), Don Sutton, Johnny Bench, Joe Morgan, Gaylord Perry, Wade Boggs, Orlando Cepeda, Goose Gossage, Ralph Kiner, Phil Niekro, Brooks Robinson, Cal Ripken, Frank Robinson, Eddie Murray, Dennis Eckersley, Pat Gillick, Jim Bunning, Juan Marichal, Ozzie Smith, Andre Dawson, Barry Larkin, Bert Blyleven, Jim Rice, Carlton Fisk, Rod Carew, Billy Williams, Hank Aaron and Rickey Henderson.  I think that was all.  I'm counting 31 of them, but I think I read that 32 were there.  I may have missed one.  Anyway, there were a couple who were in the parade, but not at the induction in Tony Gwynn and Whitey Ford.  Doug Harvey was supposed to be there, but apparently had a heart attack on the plane ride to the event and was hospitalized.  This is only something we overheard from one of the shop owners and have yet to see anything posted online. 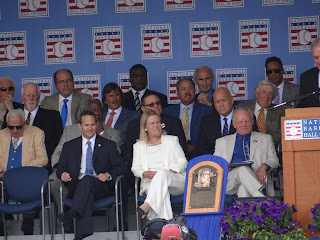 The induction was of three people via the pre-integration era veteran's committee.  1880s star and barehanded catcher, Deacon White, former Yankee owner Jacob Ruppert and former umpire Hank O'Day were the three people being inducted.  Since all of them died in 1939 or prior, their distant relatives were present for their inductions.  The ceremony also consisted of the formal plaque readings of certain Hall of Famers who were elected during wartime but due to travel restrictions for World War II, they never got formal inductions.  There were guys such as Lou Gehrig, Rogers Hornsby and guys from the HOF class of 1945.  Their plaques were read by current Hall of Famers.  The most compelling one was Cal Ripken's reading of Lou Gehrig's plaque.  Because of the lack of a superstar name, the ceremony was quite mundane.  While we were all happy for the relatives of the guys who were posthumously being inducted, it would have been cool to hear a speech from someone I had grown up watching.  I know I wasn't the only one who felt this way.  If you look closely at the pictures above and below, it definitely looks like Ralph Kiner is taking a nap. 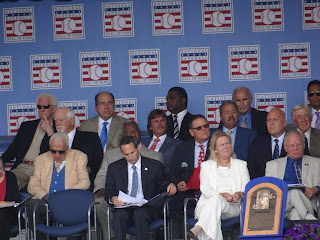 Seriously, he is at the far left of the front row.  The poor guy had nodded off.  Well, you can't really expect a 90-year old to sit through all that talking.  Again, I commend him for making the trip, and I hope I am able to travel still when I reach that age (IF I reach that age).

Remember to continue to check out Drew's blog for his take on these events and stay tuned to this one as I show some of the stuff we saw during my second ever trip to the National Baseball Hall of Fame and Museum.
Posted by William Regenthal at 9:51 PM