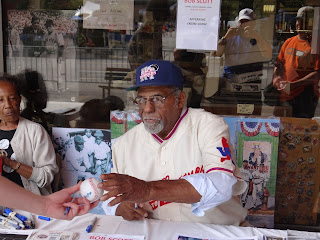 After we finished up with our signings, we all decided to check out some more shops before it was time for the parade of Hall of Famers.  In front of one of the shops were two former Negro Leaguers who were signing autographs.  The player above was Robert Scott, who was pretty cool when Drew handed him a baseball.  I'll let Drew tell that story, so make sure you are tuned in to his blog for his post.  Scott signed for us for $20, which I think was fair, considering that Negro League players weren't paid much in their day. 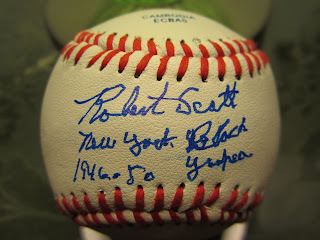 Scott filled up our baseballs with inscriptions, as you can see.  I thought he was a really nice guy.

The other guy signing at that table was another former Negro Leaguer, Pedro Sierra.  As you can see, he has a really awesome signature.  He also signed for $20.  He also gave Chris a signed card and told Chris that if he comes to Cooperstown next year, to show him the card again to show that he took care of it.

I don't know that we will make it to next year's induction, but I won't rule out the possibility.  I've learned that I should definitely not plan too far ahead because you never know what will happen.
Posted by William Regenthal at 7:34 PM