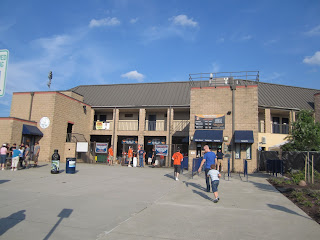 Sadly, I only knocked off one new ballpark that I hadn't been to this year when I went with Chris and my brother, Adam to Frederick, Maryland.  We hit Frederick on our way back from Drew's place, figuring we could stretch out our vacation another day by taking in a minor league game.  I also had a free hotel night with my Choice Rewards, so we got to stay there without dipping into my already stretched beyond recognition vacation budget. 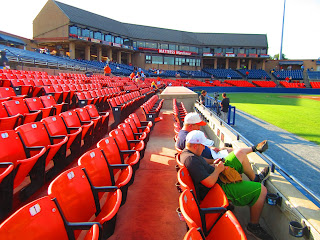 Harry Grove Stadium is a pretty nice place.  It reminded me a lot of the park in Bowie, MD and also the park in Hickory, NC.  I really enjoyed the orange seats, though. 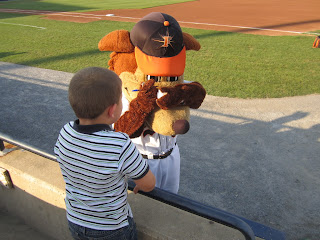 Chris had a great time.  We met friend of the blog, Matt Hobgood, former Orioles first round draft pick.  He also got to go down on the field in the third inning and take part in an on-field contest with his uncle Adam.  They lost the contest, but I was able to get them both on a really grainy video with my phone.  By the way, I got a smart phone in May and I'm loving it.  I am still getting used to apps and stuff, but being able to blog while riding in the car was really awesome.

Here is the video:
Yeah, pretty grainy, but it works. 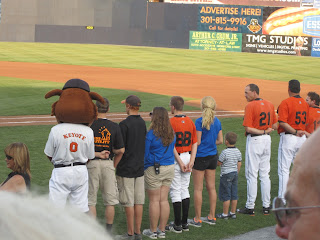 The coolest thing that happened, though, was before the game even started.  One of the employees came over and asked Chris if he wanted to be the day's "Play Ball" kid.  He said yes without even knowing what it was, but she told him that he would be brought down on the field during the National Anthem and would yell play ball into the microphone to start the game.  AWESOME! 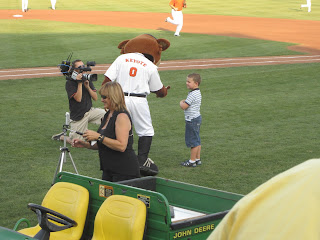 Chris did a great job.  I thought this was one of the coolest things he was able to do at a game.  He's gotten free stuff from tons of players before, but I think he really enjoyed being on the field with them and yelling play ball. 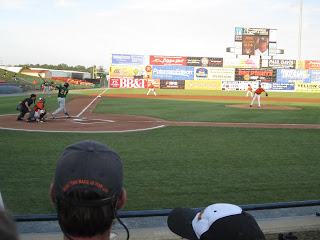 Adam was a bit disappointed that the Orioles had promoted former South Carolina Gamecock, Christian Walker to Bowie a few days before the game.  Adam is a big SC fan, so that would have been cool to get to see Walker play. 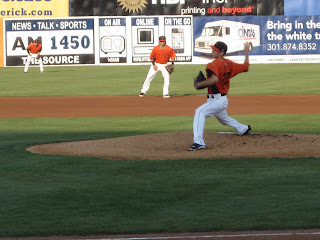 The game was really good, Adam and I enjoyed a few Natty Bohs and some hot dogs.  We really enjoyed ourselves, even though the Keys lost. 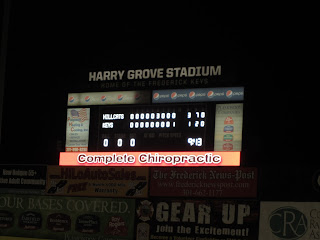 So, I guess I'll try to knock out a few more minor league stadiums next year since I didn't get to too many games this year.  Oh well, we still had a great summer and an awesome vacation.
Posted by William Regenthal at 1:08 PM