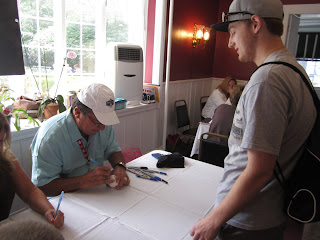 If you haven't been reading Drew's posts about our trip to the Hall of Fame, then you really are missing out.  You should head over there after you are done reading my blog to see what he has to say.  Check out his blog, here.

So, after we met Rickey Henderson, they were setting up Johnny Bench's table and he came in right when we were about to leave Rickey.  We got right in the very front of the line and got Bench with very little waiting.  He was pretty nice, I think.  He seemed as if he was a little late, but we hadn't really noticed.  Bench signed for Drew, which you can read about here. 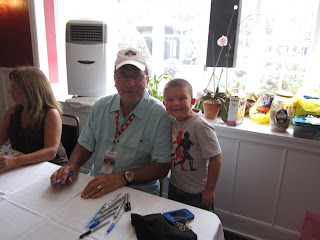 This time, we made sure Chris didn't have any baseballs in his hands so I wouldn't have to dip into any emergency funds to finance it.  He did walk up to Bench and ask if he could have his picture taken with him, to which Bench replied 'sure.'  Someone behind us was in line for his autograph, but was having a time getting whatever it was he wanted signed ready, so Bench let Chris pose for the photo while that person got his stuff together. 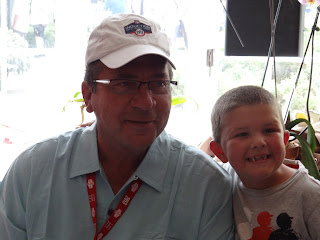 The photo turned out great.  The first one of Chris and Bench was from my camera and the bottom one was fro Drew's.  They both looked really good and I'm glad Chris smiled.  Funny thing is, all of the pictures Chris took with me show him less than amused.  I guess it's because he's seen me before.

Stay tuned for the next autograph signing, which could have taken a lot longer than it really did...  To be posted soon!
Posted by William Regenthal at 1:46 PM