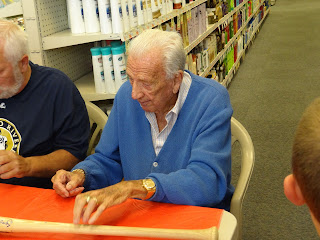 After Drew met Johnny Bench, we went outside to regroup and decided to check out another signing event down the street at the local CVS.  They had advertised Gaylord Perry, Jim Bunning, Juan Marichal and Ralph Kiner, among others.  Drew had already gotten me a ball signed by Kiner way back in August of 2010 (you can read that post here) but I posted that ball on another failed blog.  Anyway, with Kiner being one of the oldest living Hall of Famers, I had been wanting to meet him for a while.  I had a chance last year at the National Card Show, but Kiner cancelled at the last minute.  At almost 91 years of age, I was really lucky he was able to make the trip to Cooperstown. 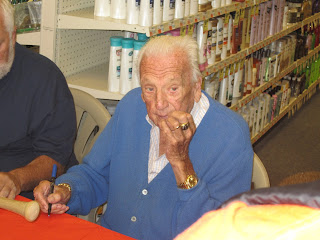 Kiner's age definitely was showing as we paid for tickets (I mistakenly bought two tickets to meet Kiner at $50 a piece, but luckily, Drew bought one of the signed balls off of me), you could see the line wasn't moving very much at all.  I was really worried that we wouldn't be able to get to our next signing, which was about to begin in about 30 minutes.  I went to the guy who was running the signing and asked him if I could just go ahead and get a refund since I had somewhere else to be and he said "No, I'll get you your baseballs signed."  I told him that was nice and all, but we really had come to MEET Kiner.  He said "Yeah, I know, come on."  So, I grabbed Chris and Drew and the guy put us in the FRONT of the line!  I was really nice about wanting the refund, because with all my years spent dealing with customers, I know better than to make a scene.  I really wasn't expecting the guy to drop us in the front of the line ahead of everyone else, but I definitely wasn't going to argue.  We all got a ton of dirty looks, though.  If anyone in that line reads this blog, I'm sorry. 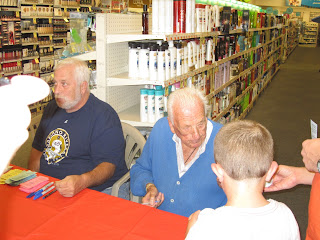 That being said, I was EXCITED to get to meet Kiner.  When he signed the ball for Chris, I could see why the line was taking so long.  Kiner labored through signing his name, taking about a minute or two to get his name on the ball.  I really respected the effort he put forth to sit there and sign for fans at his age.  He could have easily stayed home, but he made the trip and signed for all the folks who paid admission. 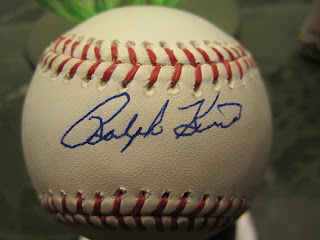 Here is the ball that I kept, selling the other one to Drew.  As far as the other one Drew got me 2 years ago, well, I'm keeping that one as well for sentimental reasons.

He was elected to the Hall of Fame in 1975 (his 13th ballot) when he was named on 75.41% of the ballot.  His voting percentage is third from the bottom all-time, better than only Fergie Jenkins (75.40%) and Al Simmons (75.38%).  His election in 1975 was very controversial, but over time, many have accepted the fact that albeit he had a short career, he is still a Hall of Famer.

Posted by William Regenthal at 11:48 AM