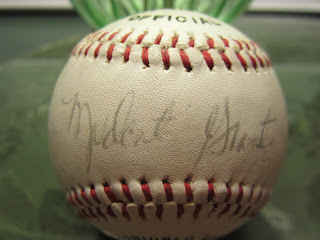 As school resumes today (at least around here), I want to reflect on some leftovers from my vacation.  When we went to Cooperstown, one of the vendors gave me a free signed baseball for purchasing so much from him.  I had a choice of several faded autographs, and settled on the above Jim 'Mudcat' Grant signed ball.

As you can see, it is faded pretty severely, but since it was free, I definitely am not going to complain.  I have been wanting to send TTM to Grant, and now, this ball makes that unnecessary.

Chris also got a free Boog Powell signed baseball from the same guy, which was really nice, since he gave it to him right after he walked in the door, prompting me to seriously consider buying some of his wares (which I did, of course).

His best season was in 1965 with the Twins when he was 21-7 with a 3.30 ERA, 6 shutouts and 142 strikeouts.  He was an All Star that season and finished 6th in the AL MVP voting (the year Zoilo Versalles won).  He didn't win the Cy Young Award that year since it was still shared by both leagues and Sandy Koufax won with all 20 votes.

He went 2-1 during the 1965 World Series which the Twins lost to the Dodgers.  He also appeared in the 1971 ALCS with the A's, but he likely got a ring from the Pirates since he played 42 games for them, garnering 7 saves in the process.  He was purchased from the Pirates by the A's on August 10 of that year, thus missing a chance to pitch in another World Series.
Posted by William Regenthal at 5:45 PM