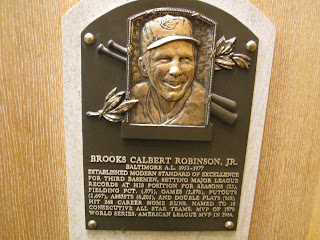 The most important part of the Hall of Fame, to me, is the plaque room.  That place, in my opinion, is hallowed ground.  I always enjoy myself in there and was really happy to share the experience with my son.  I walked him around and showed him several of the legends that he has heard me talking about.  The first plaque we went to was Brooks, which can be seen above. 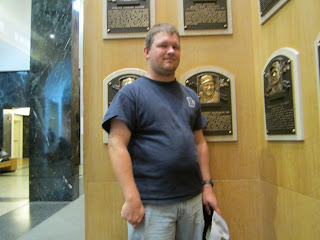 Chris took this very unflattering picture of me in front of Brooks's plaque.  He kept begging me to let him take a picture, so I finally relented and let him take one.  Not bad. 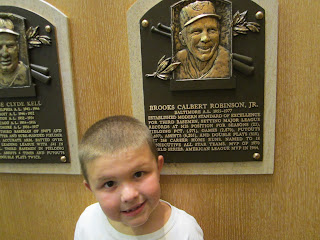 Then, of course, Chris wanted to have his picture taken in front of the plaque, so I obliged him, of course. 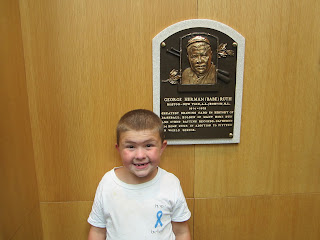 With Chris being a huge fan of The Sandlot, he had to have his picture taken in front of Babe Ruth's plaque.  Any self respecting baseball fan should have a picture of themselves in front of The Babe's plague.  I'm just saying.  He also had to touch Babe's bust as well.  This will probably be a tradition for us, I think. 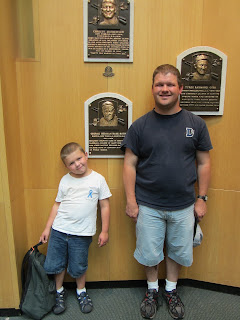 A really nice lady offered to take our picture in front of The Babe, so we were appreciative of the gesture.  When Chris then told her "Ok, you took our picture, now I'm going to take yours" I kind of freaked out, especially since she had one of those really awesome cameras.  She was really nice and showed Chris how to operate it and he took the picture for her.  Thankfully, he didn't drop her camera, which is what I was afraid of.  Maybe I should start trusting him more? 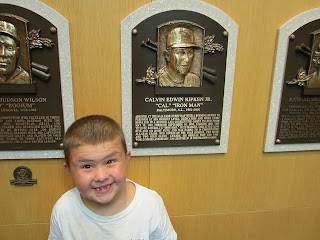 No, just by looking at that face, I know I can't trust him yet, haha.  He was happy to have his picture taken in front of Cal's plaque as well.  I read him Brooks's and Cal's plaques.  I did well reading Brooks's plaque, but when I read Cal's, I got a little choked up.  You know, reading the Hall of Fame plaque of my childhood hero to my son...  What an awesome moment. 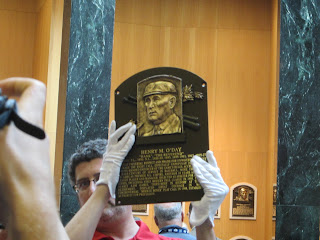 Then something really cool happened.  The staff of the Hall of Fame closed off the section of the plaque room so that the plaques of the newly inducted Hall of Famers could be hung.  I'm really excited to say that we were there when there guys' plaques were hung.  That's so cool. 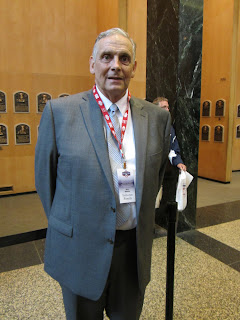 While we were standing and waiting for the plaque hanging to be finished, we noticed that the great-grandson of one of the inductees, Deacon White, was right beside us.  Jerry Watkins, White's great-grandson, accepted White's induction and gave a speech at the ceremony earlier that day.  He was really nice to us, spoke to us for a little bit, then posed for a photo.  I also thought this was really cool. 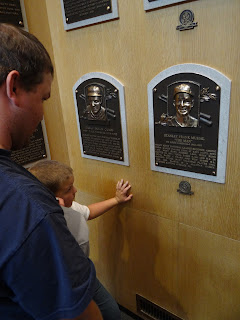 Finally, Drew did something really awesome for me as well.  I had no idea he was behind me taking this photo, but this is me reading Stan Musial's plaque to Chris.  It really meant a lot to me that my buddy was able to catch this candid moment of me sharing this experience with my son.  Thanks, Drew!
Posted by William Regenthal at 5:57 PM