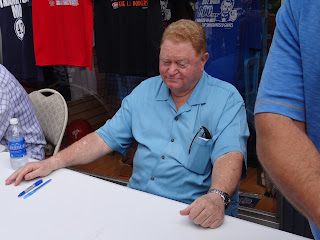 Rusty Staub looks less than amused.  Because, during Hall of Fame weekend, you, too, could have paid $25 to be able to ask Le Grand Orange a stupid question.  What I'm getting at, is before Drew and I got through the line for Staub, the guys ahead of us asked him this question: "Why do you think no one was elected to the Hall of Fame this year?"  Staub was taken a bit aback by this question, as you can see by the expression on his face.  His response?  "I have no control in the voting.  You guys know as well as I do why no one got in this year..."  I'm paraphrasing, of course, but that's the gist of what he said.  I sincerely believe that Staub wasn't trying to be a jerk, but that was his reaction to some folks laying an egg of a question out in front of him.  I can't say I blame him for his response. 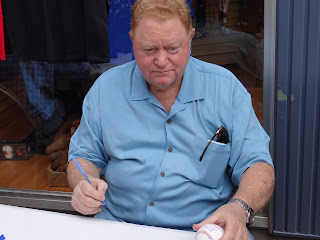 All of that being said, Staub was pretty cool to us.  We spoke briefly, very briefly, but he did sign my baseball for me.  Drew didn't pay to meet him, but did man the camera for me and got the above 2 shots of Staub. 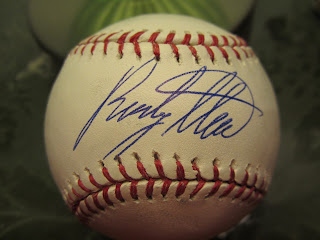 He appeared on seven Hall of Fame ballots between 1991 and 1997, but only received as high as 7.9% of the vote.  To me, I think that's a really low number for a guy who has the career stats that Staub has.  Regardless, Staub is someone who I really wanted to get an autograph of on a ball.  I had been thinking of trying him TTM but I saved myself the postage and reasearch by just paying the $25 in Cooperstown.
Posted by William Regenthal at 5:06 PM