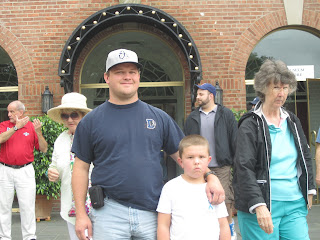 First off, someone give the old lady in this picture a hug, please.  She looks so pissed.  I mean really.  Was she surprised that someone was posing for a photo in front of the Hall of Fame?  Really?  Not only is she angrily photo bombing us, the old lady in the hat on the left side of the picture cut in front of us as we were trying to get another picture.  She bumped into me and cut right in front of us, and clearly there was someone taking our picture.  It caught me by surprise enough, that I couldn't bite my tongue and said really loud "Thanks a lot lady!"  She didn't respond.  Anyway, we were undeterred, we moved on into one of my favorite places in the world, the National Baseball Hall of Fame and Museum. 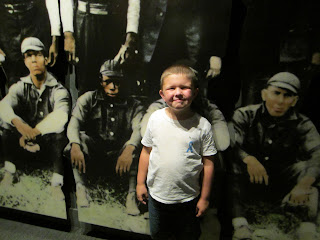 I detailed my first visit to the Hall in a series of posts back in August of 2011, which you can start with here.  I will spend this post showing a few new things and several pictures of Chris in front of some stuff. 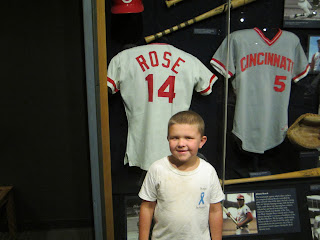 Chris had to pose in front of Pete Rose's jersey, since he is now a fan.  There seems to be a bit of a groundswell of support for Rose getting into the Hall these days with the Biogenesis crap going on.  I, for one, wouldn't mind if Rose's ban is lifted, but if his is, then the cases of Buck Weaver and Joe Jackson also need to be re-evaluated. 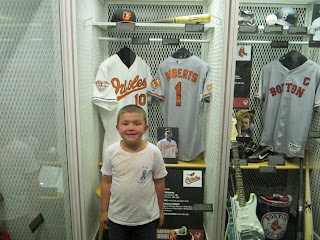 Chris has been a Brian Roberts fan for as long as he has been able to comprehend baseball, so he was really happy to have his picture taken in front of the Orioles locker that had jerseys from Roberts and Adam Jones. 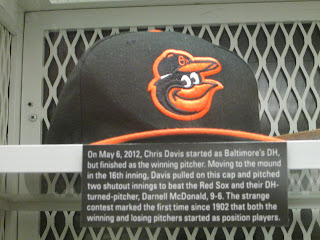 Yeah, I had to take this picture since it is of a hat worn by Orange Crush himself.  I love that it is from his game as a pitcher in May 2012 against the Red Sox.  That has to be one of my favorite performances by an Oriole.  I keep thinking back on it and am still amazed that he struck out Adrian Gonzalez and the O's squeaked out a win. 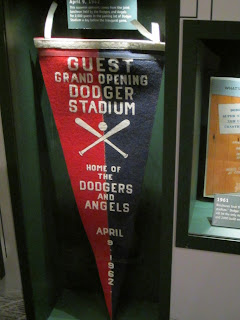 I thought this was really cool, considering that I have this pennant hanging up in my Man Cave.  Pretty cool that I have one and there is one in the Hall. 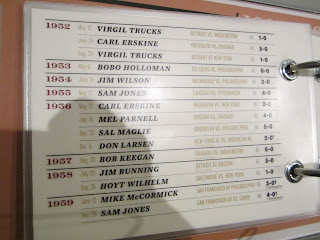 Finally, I had to make sure I paused and paid my respects to the one and only Virgil Trucks when I saw the book of No Hitters that was on display.  Being able to see his name on one of the items in the Hall brought a couple tears to my eyes and I was sure to point it out to Drew as well.  He is the one who turned me on to Mr. Trucks and I will always be grateful.

That being said, because we were there on Induction Day, the archives were closed, so I wasn't able to see my interview that I submitted a few months ago.  You have to make an appointment to visit the archives and look at any of their documents.  I was ok with this, though, because we really didn't have a whole lot of time to look into it.  I know it's there, and have a certificate to prove it.

So, stay tuned for a look at the plaque room and a unique experience that we shared while we were there.
Posted by William Regenthal at 6:11 PM