One of my favorite parts of the Trip to Cooperstown during Hall of Fame Induction Weekend (other than spending time with my son, brother, best friend and best friend's dad, of course) was the parade of Hall of Famers.  There weren't a ton of Hall of Famers present for this year's induction, but the stars definitely came out.  Missing altogether were legends such as Yogi Berra, Nolan Ryan, George Brett, etc.  The parade led off with Dr. Frank Jobe and Tommy John in a convertible 1960s Mustang.  Jobe was to receive an achievement award.  Jane Forbes Clark and Jeff Idleson rode by in the back of a truck.  Then came the Hall of Famers themselves.  They came along in order of their induction, so Whitey Ford (inducted in 1974) was the first legend we saw.  Drew's Dad and I were camped out along the barricade next to one of the Hall's interns, Bill, who was a really nice guy.  The three of us chatted for a good while before the parade started and between legends.
Ralph Kiner must have finally finished with his line of autograph seekers, because he was atop this truck.  Unless the guy beside him is the list autograph seeker.
Chris was camped out right between me and Bill the intern, right against the corner of the barricades.  He jumped and screamed as we told him who each Hall of Famer was.  The first one to acknowledge us was Hank Aaron.  That was surreal because the real Home Run King waved at us as he passed by.  I would have loved to have met him and talked with him, but I probably would be a quivering mess due to severe star struck-ness.
I had my 'Buckle Up Birds' shirt on and as Frank Robinson passed, I screamed "Go O's!" to which Chris continued, while jumping up and down. 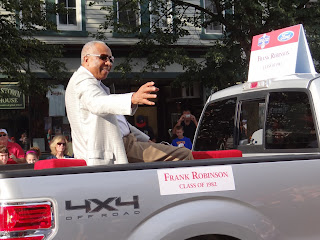 Frank (he is on a first-name basis among Orioles fans, much like Earl, Cal, Jim, Brooks and Eddie are) heard us and said "That's right, go O's!" and waved at us.  The above picture is frank's reaction to Chris.

I got really emotional about the next Hall of Famer, none other than Brooks.  As he passed, I yelled "I love you Brooks!"  He heard me and said "I love you too, thank you so much for coming out!"  I was speechless. 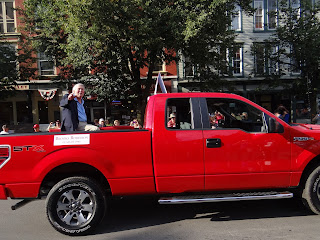 Drew shot this picture as Brooks was acknowledging me.  That man means so much more to Oriole fans than other sports fans can ever fathom.  He is always courteous and gracious to fans and I can't get enough opportunities to express my fandom and love to the greatest defensive third baseman in the history of baseball.  I was so happy to be able to shout to him what I felt and to have him respond was so awesome, I teared up a bit during that moment.
Phil Niekro was really cool as he passed by.  Chris was jumping and yelling.  Niekro noticed and waved, using his knuckleball grip.  That was pretty awesome.  He has been working with the Orioles lately, teaching two of their minor leaguers how to master the knuckleball.
This was a great shot I took of Ozzie Smith.  He is one guy who seems genuinely happy to be a Hall of Famer and I think this photo captures that.  I'm really proud of myself for this shot, actually.
Finally, there was Cal.  He also acknowledged us as he passed by.  This shot is from Drew who got Cal as he was pointing and waving to Chris.  I doubt Cal remembered that he met Chris last year in Greenville.  Chris remembers it though.

One thing I did want to point out about the parade that was disappointing was seeing Tony Gwynn.  He has been battling mouth cancer over the last fer years and seeing him atop that truck, you could tell the cancer has returned.  I had read about it returning recently, but seeing his swollen face, definitely confirmed it.  He has also regained a lot of the weight that he lost during his last bout with cancer (which took him down to his early career weight).  It was really sad to see and it put a little bit of a damper on the parade.

That being said, I really enjoyed the parade.  I know Drew and his dad did as well.  Adam (my brother) told me that he enjoyed it as well.  It was so awesome being able to see some of the Hall of Famers that I have only read about or seen on TV.  Being able to have Frank, Brooks and Cal acknowledge us was really cool as well.  Also, being able to say that you were waved at by Hank Aaron is pretty cool too, I'm just saying.

So, make sure you stay tuned to Drew's blog for his take on the parade and a look at some of the guys I didn't feature as well.  His dad got a really cool reaction from one of them, but you have to keep an eye on his blog to see it because I'm not going to be the one to spoil it!
Posted by William Regenthal at 9:48 PM