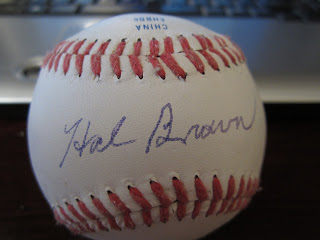 I got another TTM success yesterday, this time from former pitcher, Hal Brown.  Brown is my 70th (wow!) TTM success.  I sent to him on Tuesday, February 19 and got him back yesterday, March 2.  That makes him a 11-day TAT.

Brown lives in Greensboro, NC, which is about 30 minutes from where I grew up, so it was really cool to get a fellow NC native on a ball.

In addition to signing my ball, Brown also took the time to answer a couple questions I sent along:

What do you feel was your fondest memory from your playing days?
One hitter against the Yankees

Who was the toughest player you faced?
Yogi Berra

Who was your favorite teammate?
Sid Hudson

I always enjoy it when a TTM subject takes the time to either inscribe something extra or write a little something in return.  I save all of these responses in a notebook and look back on them later on when I need something to do.
Posted by William Regenthal at 1:16 PM