Old Foul Cardboard in the Mail 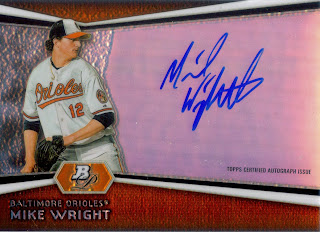 I got a nice surprise envelope in the mail from Chris and Kyle over at the fantastic blog "Old Foul Cardboard."  Apparently, my blog was one of the inspirations that led Chris to start his blog.  I don't know how it was, but that's cool.

Anyway, Chris and Kyle sent me a few O's cards.  One of them was the above Mike Wright Bowman Platinum auto.  I didn't know it at the time, but my son Chris and I met Wright at an ECU game a couple years ago.  Chris was watching him warm up in the pen; Wright signed a ball and tossed it to him.  Chris left the ball in the car, which rolled out at my in-laws house some time later.  Several months after that, my mother in law hands me the ball "This was on the ground by the driveway after you left last time, it looks like it was signed."  I looked at it and yep, it was signed.

Funny thing was, though, I immediately recognized the signature as well because I remembered Wright had been drafted by the Orioles.  Since I live near ECU, I paid special attention to guys from there that were drafted and I thought it was cool that the O's picked him up.  So, now, it's even cooler that we have the ball signed by him AND that it had it's own journey to get here.
Posted by William Regenthal at 4:04 PM

Nice card and nice that you have his signed baseball to!