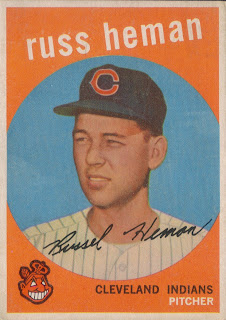 I have had so much mail come in lately, I'm starting to lose track of what all needs to be posted.  No worries, though, I will get to all of it.  First of all being the stuff I got from COMC earlier this week, followed by some trades.

I picked up some set needs from COMC recently; I have already shown the 1971 Topps Tom Seaver that I got.  I also knocked off two 1959 Topps cards.  Above is card number 283, Russ Heman.  Awesome last name.  I wonder if he would yell "I have the power" when he would burn a fastball in there.  Anyway, Heman played one season in the majors (1961) for the Indians and Angels.  He played in 12 games, pitching 20 innings for a 2.70 ERA.  He didn't register a win or a loss and also didn't get a hit in his 2 career at bats.  That's a lot of zeroes on his stat sheet.  Also, not a bad ERA for a reliever.

I did find out something interesting when I was looking Heman up on baseball-reference.  He was traded by the White Sox to the Orioles in December 1957 along with Jim Marshall, Jack Harshman and Hall of Famer Larry Doby for Tito Francona, Ray Moore and Billy Goodman.  Until now, I had no idea that Larry Doby had been in the Orioles organization.  Doby was traded on April 1, 1958 with Don Ferrarese for Bud Daley, Gene Woodling and Hall of Famer Dick Williams.  Neither Heman nor Doby appeared in a game for the Orioles.  He man was traded in December 1958, along with $30,000 cash for infielder Bobby Avila.  Heman is still alive (born in 1933), I wonder if he signs TTM...  Hmmm. 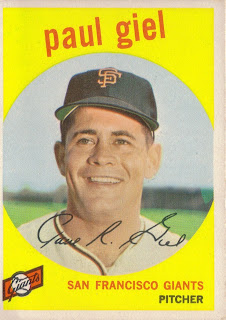