Completing a Trade - With My Son 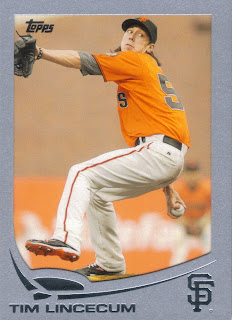 Even though I bought him the 2013 Topps Jumbo pack from the LCS, when my son Chris pulled a pink parallel, I told him that I would trade him something cool for it so I could, then, flip it to someone else in another trade.  So, I showed Chris a few of the Tim Lincecum parallels from 2013 Topps and told him that if I couldn't get the Silver Slate parallel, then I would try to get him a Blue Sparkle parallel.  Well, I was able to get him the Silver Slate parallel after all, but I might still get him the Blue Sparkle, just because, you know, he is an awesome kid.

The Lincecum is numbered 10/10, (Ohhh Emmmm Geeee, Ebay 1/1!!!).  I 'traded' it to Chris for the Pink Parallel Rafael Furcal that he pulled, which I will then flip to Weston over at Fantastic Catch.  I know I overpaid him, but he is my son, and I knew he would really like this Lincecum.  I got myself a Silver Slate parallel, which hasn't arrived yet, but when it does, you know it'll get posted on here.
Posted by William Regenthal at 5:52 PM

hmmm, I have an idea who your silver slate might be, but I'll never tell!