I completed a trade with Dustin over at the blog 'Coot Veal and the Vealtones' the other day when I sent him an Ivan Rodriguez relic from some past A&A offering in addition to some Carlton Fisk cards.  In return, amongst some Orioles cards was this Virgil Trucks from 1994 Ted Williams, which I did not yet have in my collection.  I have probably 75% of all of Mr. Trucks' cards.  I hope to get some of his oddball cards from his playing days when I get a little money, but the big ones are mostly in my PC now. 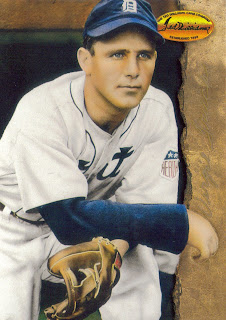 The main piece I was trading for, though, was the below 2006 Bowman Chrome Brandon Snyder auto.  Snyder is a favorite of mine and I was happy to add this Bowman Chrome to my small Snyder PC.  I know Brandon has read my blog at least once, so maybe he'll see this on here! 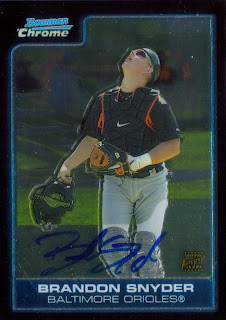 Snyder didn't last long as a catcher in the O's system.  I believe he hurt his shoulder early on and was converted to a first baseman.  He was traded to the Rangers last year.  I believe the Rangers signed him to a minor league deal this past offseason, so I'm hoping Brandon can get back to the majors and stick around.  He is an awesome guy; the kind you really want to root for.

So, thanks for the trade, Dustin!  I really appreciate ding the deal and I hope we can match up again.
Posted by William Regenthal at 8:47 PM

Glad you liked the cards, and you just made me like Snyder more. A player who reads the blogs, awesome.