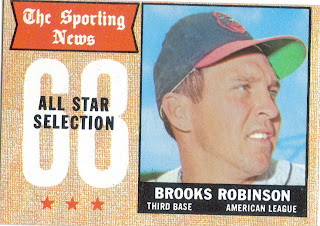 It is tough finding a Brooks Robinson card that I don't already have, especially one from his playing days.  So, when I had some credit to spend on COMC a couple weeks ago, I decided to finally add this card to my PC.

I know many of you don't like the 1968 'burlap' design.  I'm one of the few who do, I suppose.  I mean, it definitely is different.  Come to think of it, there aren't many incarnations of Topps that I DIDN'T like.  Well, some of the repitition in the mid 60s and again in the mid to late 90s notwithstanding.

Anyway, the 1968 set is low on my priority list as far as sets I would like to complete, mainly because I know getting a Nolan Ryan RC will be tough.  The set will be tackled one day, that's for sure.  I just have a whole lot of other sets in front of it.
Posted by William Regenthal at 5:31 PM

For some reason those All-Star cards bring back memories of my collecting as a kid.

Speaking from experience. Getting a Nolan Ryan RC is not too tough, but since it's one of the most counterfitted cards in the market, peace of mind is expensive. Pass another geology exam, get a promotion or another awesome performance evaluation and reward yourself.