A Card From A Game I Attended 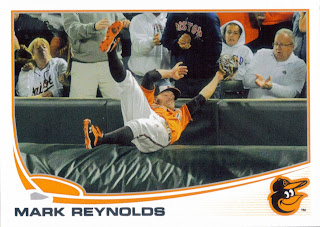 Only once before have I ever been able to pinpoint a single baseball card to a game that I actually attended in person.  That one was an Upper Deck Brian Roberts card from 2006 depicting a game in which Roberts won for the Orioles with a walkoff home run in the 13th inning.

Now, I can add another card to my collection that I can say I was in attendance for - This 2013 Topps Mark Reynolds 'Out of Bounds' short print.  This came from the September 29, 2012 (Brooks Robinson Sculpture Night) against the Red Sox.  I attended the game with my wife, son, fellow blogger Ryan and his wife.  This was definitely a memorable night.  Ryan and I were checking out the sculptures when this play occurred, but we definitely were in attendance.

I got this card in a trade with my good friend, Scott.  He writes (when he has time) the blog "Mr. Baseball Scott."  He is also one of the few bloggers that I actually have met in person.  He comes to the Raleigh card shows with his family from time to time.

I just think it is really awesome to be able to look at a card and know that you were at that particular game.  Ok, I admit, it took my wife pointing it out to me that we had been at that game, but come on, I was still there!
Posted by William Regenthal at 8:27 PM