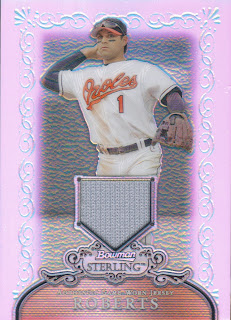 The trades keep coming in.  This time, I got a nice package from Brad over at Brad's Blog.  I sent him a 2008 Topps Frank Thomas relic that we had discussed for the above Bowman Sterling Brian Roberts.    This is a 2006 Bowman Sterling numbered 116/199.  I always enjoy Bowman Sterling, even thought I can't really afford to bust packs or boxes. 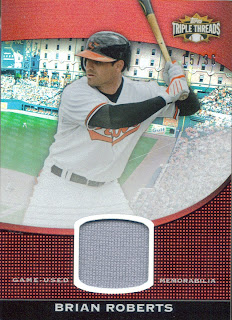 Brad also threw in this 2011 Topps Triple Threads Roberts relic.  Apparently, there are two other cards to this that can create a Triple Threads Unity Triple Relic Card.  I'm going to have to look into that.  I included some extras in my trade package to Brad, but I still don't think I included enough since this card is numbered 15/36.  I know I'll be sending Brad some Phillies stuff as I get it to compensate, for sure. 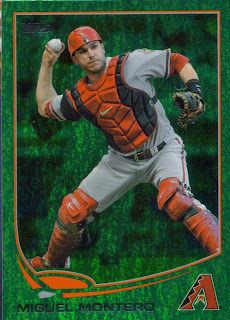 Finally, Brad knocked several more 2013 Topps Emerald parallels off of my wishlist.  I really need to do another count of them and update myself as to how far along I have come.  I'll have to do that once I get a few more of these trade posts written.

So, thanks for the trade, Brad.  I really hope what I sent helps you out.  I'll definitely keep an eye out for more Phillies and Frank Thomas stuff to send your way.
Posted by William Regenthal at 6:08 PM

That bowman sterling scans nice! Thanks for the trade, look forward to the next one! If you come across any Thomas's relic or autos let me know!