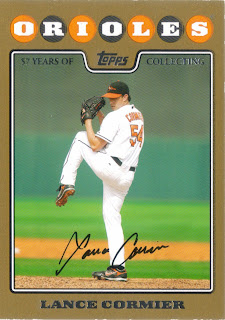 Sometimes, it's not what cards are in the trade package that matter most; sometimes it's the thought that goes into the trade.  I send Schuyler (check out his blog, he writes rarely, but when he does, it is a great read) cards all the time.  Usually what I send him are Yankees and Team USA cards when I find them.  I met Schuyler through my good friend, Drew, and I feel like Schuyler and I have become pretty good friends as well.

Anyway, Schuyler sent me an envelope this past week that had two cards in it.  One was the above 2008 Topps Gold Lance Cormier and another was a 2011 A&G mini George W. Bush A&G back.  Also included in the envelope was a nice note from Schuyler explaining that he has a hard time keeping up with what I send him and these were the only cards he could find so that I felt like I got something in return.

The note went on to talk about meeting a former Orioles pitching coach in person (Ray Miller - also a former Orioles manager).  My point is, I absolutely loved the thought and the note.  It goes back to my post earlier today about how much I liked when a TTM subject would respond with a note of their own.

So, I plan on continuing to send Schuyler stuff when I find it, because I know he enjoys getting stuff in the mail, much like I do.  He's a really good kid and I'm glad he still blogs from time to time.
Posted by William Regenthal at 8:25 PM