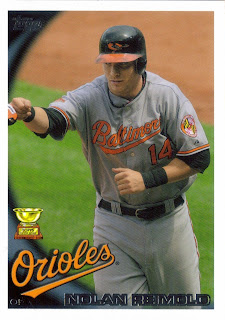 I was finally able to snag a hard to find 2010 Topps Rookie Cup SP Nolan Reimold for $25 (yes, $25) off of COMC earlier this week.  I had no idea this card even existed until my good friend Ryan told me about it.  The 2010 Topps Update set had several 'Rookie Cup' short prints inserted in packs, and Nolan was one of the subjects.

I now have every one of his 2010 Topps variations, with the exception of the black parallel and platinum parallel.  I know where the platinum parallel is, so that one shouldn't take too long to get into my collection.  I have had a tough time finding black parallels of his 2010 Topps, though.  I'm also not sure if there are any other parallels that I haven't seen, like wood, or factory set exclusives.  I'm hoping the two parallels are the last ones I need, though.  Then, I can concentrate on finishing the 2011 and 2012 variations.
Posted by William Regenthal at 8:12 PM

Nice pickup man! It feels cool to know that you own a good majority of a player's cards!