Trip to the Card Shop From 2 Weeks Ago 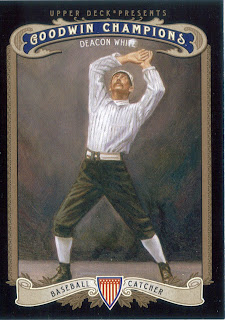 I told you I was behind.  Anyway, I bought several packs of cards when I went to the LCS a couple weeks ago.  Two of the packs I picked up were 2012 UD Goodwin Champions and 2012 Panini Golden Age.  I also got some other stuff, but what I pulled out of those was unremarkable.  So, one of the cooler cards I got was the above Deacon White out of the pack of Goodwin.  White was one of three people elected posthumously into the Hall of Fame this year by the Veterans Committee.  White was one of the original stars of the game and played in the first game of the first professional baseball league.  He was also a 'barehanded' catcher.  I think that alone should have earned him a ticket to Cooperstown.  Go ahead and try catching barehand.  I'll wait.  Ouch, right?  Can you imagine having to catch Bob Feller or Randy Johnson barehanded?  That makes my hands swell up just thinking about it. 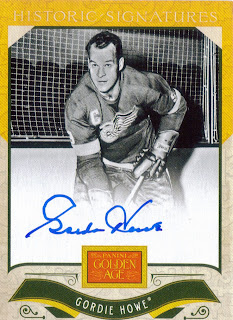 Something else that I pulled, even thought it is non-baseball, was this Gordie Howe signed card out of 2012 Panini Golden Age.  Golden Age has a mixture of subjects and sports, just like Goodwin, and normally, I don't gave a crap about hockey, but...  A RED WINGS PLAYER!  I was able to hand this over to my wife to justify my spending some money on cards.  Woo Hoo, things work out!

Seriously, though, this is a really cool card.  Even I can recognize that Howe is one of the all-time greats in Hockey.  Add in the fact that the auto is on card, makes it that much better.  Plus the wife is happy.  For once.
Posted by William Regenthal at 6:15 PM

Like you I'm not a hockey guy, but I can even appreciate the Gordie Howe auto. Nice pull, glad you were able to purchase something you enjoy.