The second of the two signed baseballs I got in Cooperstown was a ball autographed by Rick Ferrell. I have been looking to get one of his baseballs for a while now. He is one of the cheapest HOF signatures, even though he passed away in 1995 at the age of 89. 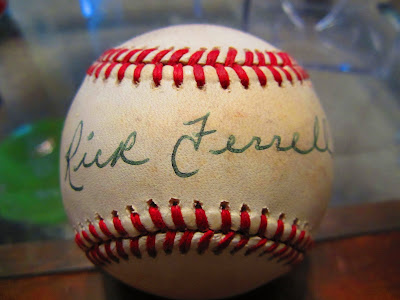 I wrote about him here when I picked up his 1933 Goudey RC. He was elected to the Hall of Fame in 1984 by the Veterans Committee and seems to be one of the biggest cases as to the flaws in their former way of enshrining players. Ferrell had a long career, but his numbers don't seem to measure up to those of other Hall of Fame players.

Nonetheless, I'm glad I was able to pick up this baseball for $50 and have it become my 43rd Hall of Famer in my collection.

Posted by William Regenthal at 11:15 AM