Another Pickup in Cooperstown 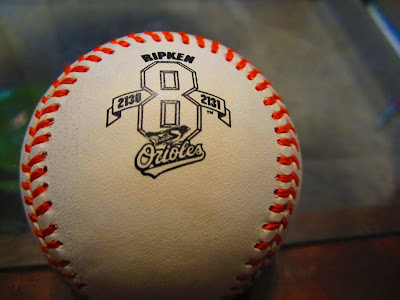 A final piece I was able to get in Cooperstown is the above official MLB 2130-2131 logo baseball. I got this ball from the same shop that I got the previously mentioned Ferrell and Herman baseballs. I have recently decided that I would like to get some older (maybe antique) baseballs and display them in my man cave. I asked the guy in the shop if he had any old baseballs, he laughed and said "I have boxes of them..."

He brought out a box that had a bunch of baseballs in it and let me take a look. I found the Ripken ball and took out an older looking one that had some faded signatures on it. I asked him if he'd be willing to sell one of the baseballs that had a bunch of signatures on it, and he said he might after taking a better look at them. He pulls out a magnifying glass and looks at one of the balls. "Oh, that says Ed Ford on it... well that's Whitey Ford. Oh wait, that is Mickey Mantle on the sweet spot! Its faded but you can see, its him..."

Yep, it was Mantle, alright. Dang, I wasn't going to be able to get that ball. I picked up one that looked older, it was definitely an Official League Spalding Ball that also had some faded signatures on it. He looks at it and points out: Bob Feller, Early Wynn and Buck Leonard among the signatures. The ball also had 1976 induction written on it. Jeez. I helped this guy find at least two baseballs that were worth LOTS of money. He did give me a nice deal on the Ferrell and Herman baseballs and also threw in a signed post card that I will discuss in my next post. I thought you guys would love to hear about my almost epic pickups though... Almost.
Posted by William Regenthal at 12:38 AM

Well damn, he just had that laying around? Oh here's a Mantle, oh here's a Wynn. Well at least you got some cool stuff. I need to go back up there one of these days. I went when I was young. I must've been 9 or 10. I enjoyed it then but I'm sure I'd appreciate it a lot more now.

Yeah, that was pretty much his reaction, too. I asked what he'd sell one for and he responded by putting them aside for authentication. I didn't have a chance, haha.