Antique Baseballs in the Hall of Fame

For all of you who have not been afforded the opportunity to visit the National Baseball Hall of Fame and Museum in Cooperstown, NY or for those of you who haven't been in a long time, I have decided to share my experience with you via several blog posts showing some of the things I found interesting.

Something I realized as I have been collecting autographs of Hall of Famers on baseballs is that I like finding the old style baseballs. Be it ones from the era of league presidents or beyond, I find them to be really cool.

So, that being said, the Hall of Fame boasts a lot of baseballs from the game's beginnings and I found those exhibits to be very interesting. 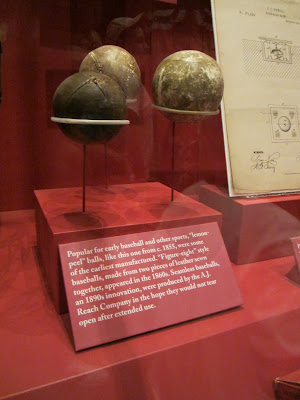 Here are some examples of early baseballs. The figure eight style ball originated around 1860 and was the basis of the style of ball that is used today. I just watched an Ebay auction end for a figure eight style baseball and it sold for $259.93. When I started watching the auction two days ago, the ball was going for $10.50. That's a HUGE jump. Clearly, these baseballs hold great value and I'm definitely hitting up some antique shops now.

The precursor to the figure eight style ball was the 'lemon peel' baseball. It consisted of four pieces of leather stitched together and were used from around 1850 to around 1860.

Seamless baseballs were used around the turn of the century in hopes that they would surpass the figure eight style with exposed stitching, but as we can see today, they didn't quite work out. 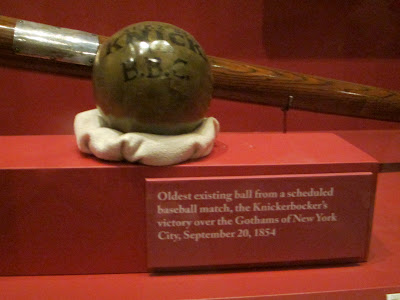 Here is a picture of the oldest existing baseball from a scheduled baseball match (see the caption under the ball). The winning team would decorate the game ball and display it as a trophy showing off their accomplishment. 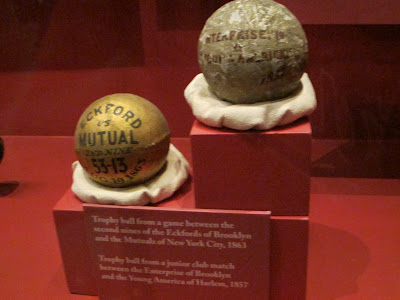 Here are more examples of trophy balls. Both are from the mid 1800s and look really cool. 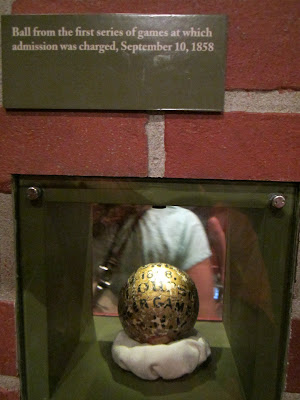 Here is a photo of the ball from the first baseball game where admission was charged. Again, baseballs like this look really awesome. I wish I could stumble upon something amazing like this. 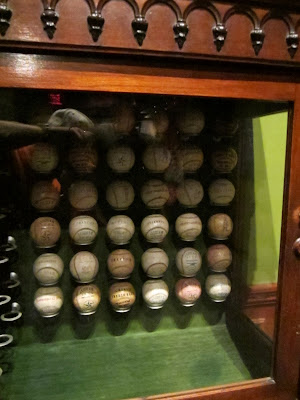 Inside this case is a series of trophy balls from various teams. Most were 'working man' teams, kind of like adult softball leagues these days. 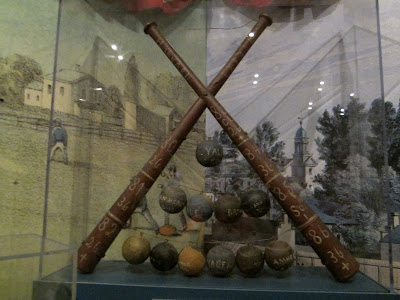 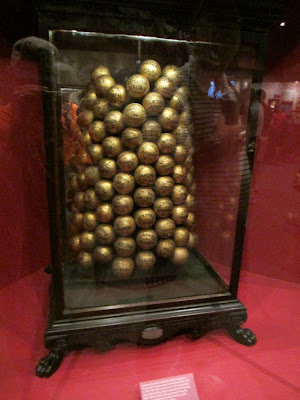 This mass of trophy balls used to be displayed by the Eckford Base Ball Club in Brooklyn. They were a collection of laborers who would play in the New York City area. They amassed over 150 trophy balls during their existence. 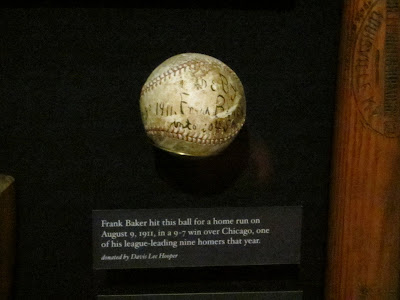 Here is a ball that was hit for a homer by Frank 'Home Run' Baker in August of 1911 (making this ball almost exactly 100 years old).

So, as you can see, the Hall of Fame boasts a lot more than just player plaques. I wish I had weeks that I could have spent there, instead of just the few hours I was afforded.

If anyone out there has a figure eight or lemon peel style baseball that they would like to donate to a worthy cause (my man cave), I'm all ears!

Posted by William Regenthal at 9:44 PM