I really enjoyed all of the memorabilia shops in Cooperstown. It was awesome seeing all of the autographed baseballs that were there. Some of the shops were very overpriced on their autos, but if you look hard enough, you can find a few where the autos are reasonable. I found one that was attached to a restaurant (sorry, I can't remember the name) that had a bunch of autos for great prices... 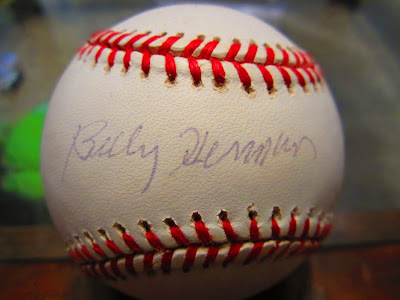 I bought 2 autoed baseballs from the guy, plus a blank ball. The first ball I'll show is this Billy Herman signed ball. The guy originally wanted $100 for it, but since he thought it was too faded, he knocked the price all the way down to $30.00. I had to jump on it. Don't worry, the ball is JSA authenticated. I think the auto is fine.

I was really glad to be able to pick up this baseball, especially since most of his baseballs average over $100. Herman is my 42nd Hall of Famer.

What a great pick up, William!

I agree with you, the signature really looks fine, and this fact is helped out by the leather being in such good shape with minimal toning. Kudos to the dealer, too (wonder what the shop's name was?), for being honest and willing to look reasonably at one of his items.

I can't wait to see what the 2nd ball was!