I've been trading cards back and forth with fellow blogger, Drew, since at least July 2009. Since that time, we have become very good friends and talk almost daily. If you don't read his blog yet, you really should check it out: http://drewsbbcards.blogspot.com

He and I have been linking each other's blogs for a long time, it seems. It is funny to me that even though he is a huge supporter of the one baseball team that I absolutely hate (the Yankees), he and I have actually parlayed that friendly rivalry into another building block to our friendship.

When Drew found out that on our way home from Cooperstown, we would be in the general vicinity of where he lived, he and I decided that it would be cool to meet up at a Hudson Valley Renegades game (so I could save some postage on the next stack of cards I had set aside for him and so we could finally meet in person). 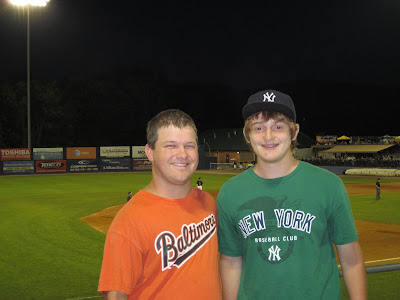 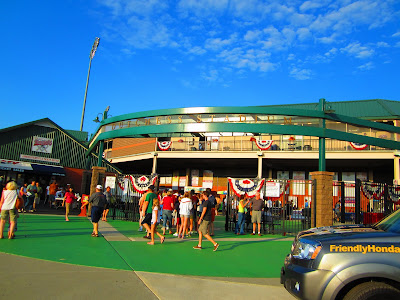 Dutchess Stadium was really nice. It was also packed because a double header was being played today. The team is in the same league (NY-Penn) as Auburn (who I saw on the 2nd) but the crowd and stadium were polar opposites! 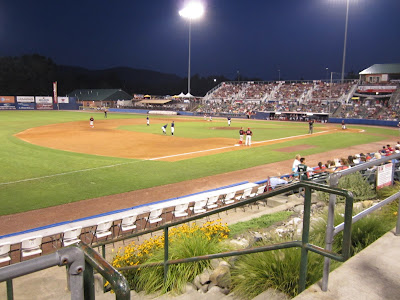 We, unfortunately, were unable to catch the entire game (game 2, which the Renegades lost, 2-1), but we were all wore out from busy weeks. It didn't matter though, what really mattered was seeing how our shared love for baseball and baseball cards was able to bring together two people despite a large age gap and geographical distance. This, truly, is what I love most about baseball. It really does draw people together. I'm happy that it has helped create a friendship that has grown because of a July 2009 trade of a Brian Roberts UD Masterpieces relic for a Robinson Cano Co-Signers auto....
Posted by William Regenthal at 12:40 AM

What a fun night for sure, hopefully the first of many more visits! Glad you guys had fun and we definitely did too!