I thought I'd spend the evening listening to Hurricane Irene leave town and writing a blog post.

One of the coolest things I realized when I was walking around the Hall of Fame was that I was seeing first hand some pieces of memorabilia that shaped the very foundation of the history of the game that I love so much. There's probably not another player who completely embodies that history than George Herman "Babe" Ruth. 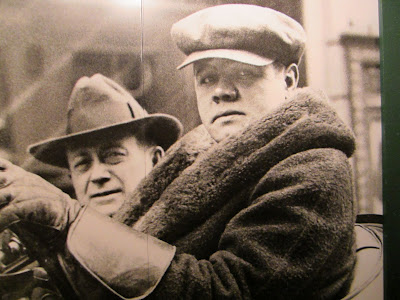 You all know that I am NOT a Yankee fan. I don't pretend to even tolerate them. I downright loathe them. However, I respect them. No franchise in baseball carries as much history as the Yankees. One of the biggest reasons is Babe Ruth. He was IT. A true showman. Whether you believe all of the legends. Did he really call his shot in the 1932 World Series? I don't doubt it, but there are stories that try to bring the legend of Ruth back to Earth somewhat. I love Ruth because of the larger than life aura that still surrounds him, even today. He might not have been the single greatest player ever (some believe that Ty Cobb should have that honor), but he should be player #1A. Ruth saved baseball from the black eye that was the 1919 Black Sox scandal. Ruth's epic home runs captivated crowds and put butts in the seats. They didn't call old Yankee Stadium "The House That Ruth Built" for nothing. So, my point is (because I'm rambling) that whenever I saw a piece of Ruth's memorabilia in the Hall, my heart skipped a beat. 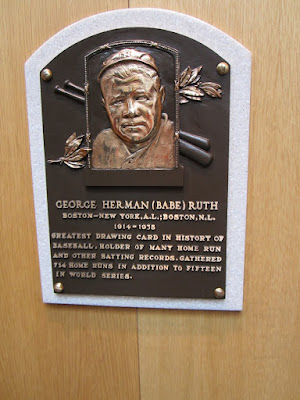 I had to make sure that I, like many other fans before me, touched the bust of Ruth when I saw his plaque. I couldn't even speak when I stood and admired his plaque. In my opinion, the entire thing should be gold or something. Maybe some flashing lights. It is amazing to see in person. 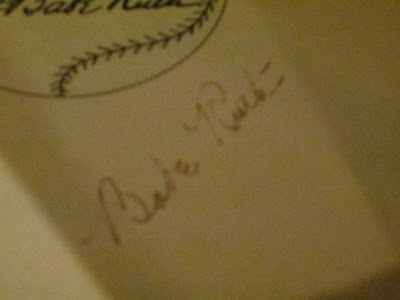 It was really cool to see this book. According to the display case, Ruth signed this book for his nurse the night he passed away. It was one of his final acts and it is very fitting, signing an autograph on his deathbed. 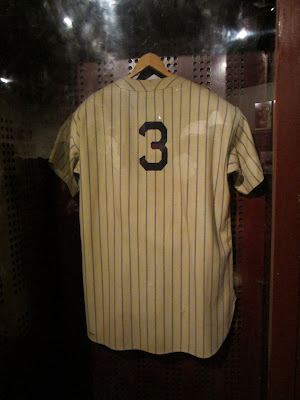 By far, the coolest piece of memorabilia that I was able to get close to was Ruth's jersey. Seeing that big #3 and those pinstripes can take the breath away from even the staunchest Yankee hater. It was almost surreal to walk along the row of artifacts and items and come upon this jersey. Truly an amazing experience that all baseball fans should feel at least once in their lives.