Count It - My 1987 Topps Roberto Clemente Is Signed 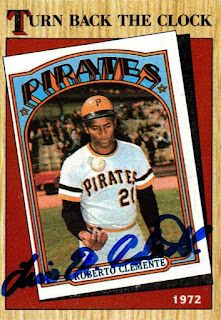 Since he died in 1972, there was no possible way I would have been able to get Roberto Clemente to sign my 1987 Topps Turn Back The Clock.  Unless I had a DeLorean, but I don't.  So, I have been working since I started this set several years ago to try to get a Clemente to sign the card.  Three failed attempts sending to the Roberto Clemente Foundation, two failed attempts sending to his brother, finally, I was able to have my friend, Jackson, get this signed by Luis Clemente while he was visiting Puerto Rico this summer.

Jackson was really cool about getting my card signed.  He was going to try to get it done in February, but the Clementes weren't there, so I had to wait until Jackson went back this summer.  The card is finally done, and one that most folks leave off of their checklist has been added to the album.

Thank you so much for helping me out, Jackson!  It is really appreciated.

Posted by William Regenthal at 10:28 AM