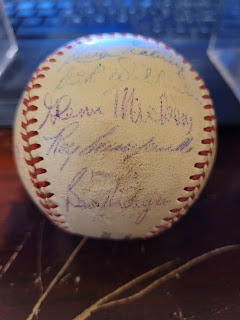 While cleaning out my backpack from the National, I realized that I forgot to post a few of the baseballs I picked up, most importantly, this one signed by Hall of Famer, Roy Campanella.  I don't know how I missed it; I really thought I had already posted it.  Anyway, I got a great deal on it and was glad it was a pre-accident signature.

Campanella is my 166th Hall of Famer on a baseball.

Sweet ball. I wish I had collected memorabilia back in the 80's. I've seen at least one card show ad where he signed and he only charged a few bucks.