A Signed Card From Gerard 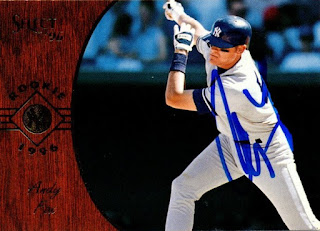 I got a package in from my good friend, Gerard the other day that had some birthday stuff (that I'll post later) and this card that he was able to get signed for me by Andy Fox.  I like the design of the card, a 1996 Select.  I have a thing for wood-grain cards, and this is a nice one.

Thanks for getting this signed for me, Gerard.  It will look great in the album.