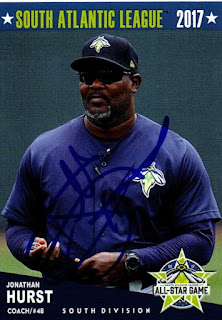 Normally, I like to keep a positive spin on my posts, but in reality, not all of my trading and 50/50 experiences are positive ones.  This one from a guy named Cody started out promising, but ended after almost a year of little communication and almost not getting my cards back. 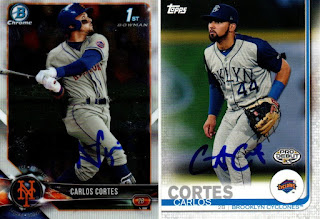 Cody hit me up last season, asking me to do 50/50s with him for that season.  I was advised by a mutual friend that I should proceed with caution, but I sent some stuff anyway.   I waited until the end of the season, and started messaging Cody about when he would send my stuff back.  No responses for quite a while, I was ready to give up on these cards and take the loss.  Our mutual friend told me that he probably would run into Cody this season while graphing and could help me get my stuff back.  A couple months ago, I finally got a message from him.  It was loaded with excuses and a half-apology.  Finally, I got my cards back.  Kind of.

A lot of what I sent was sent back unsigned, with a bunch of random cards tossed in.  The ones that were signed were great and all, but I'm not 100% certain they're all ones that I sent.

One positive that I got from this experience is that I now log what 50/50s I've sent to people to help me better track what I've got out to folks.  Cody has reached out to me a couple times after this to try to have me send him more stuff, but I have respectfully declined.  I'm not one to block folks, but I also don't want to send more stuff out and have to wait a year to get it back.

I guess trades and 50/50s aren't always sunshine and rainbows, but I do feel bad about not being more positive this morning.

Posted by William Regenthal at 11:17 AM