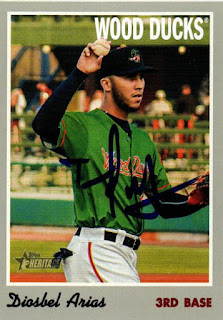 For some reason, my Texas connections have fallen off recently.  I thought I had found a good 50-50 partner there to make up for it, but since it took a year to get these signed cards back from Mike in Texas, I think I will be on the lookout for someone else to take Frisco and Round Rock cards.

I was glad Mike took the cards that he took, and I was able to finally get a few of my Hans Crouse cards signed, but he held the cards hostage while I worked out a trade to get my 2019 Bowman Draft Davis Wendzel card back.  He knew I was only sending one of his cards, which is all I could find.  I told him that ahead of time.  He agreed to take the card and got it signed, but when it came time to send everything back, he thought he should hold everything until I sent something suitable for Wendzel in return.

I have gone on record saying that I hate trading, and this was a scenario that made me dislike it even more.  I had told him that I would show him some of my extras and we could work out a deal, but when I offered him anything, he would come back with "I only want top 100 prospects."  So, I found the best names I could find (like Leody Taveras, who, at the time was a top 100 prospect for the Rangers, of course) and he said "I don't know who that is..."  That happened with every player I showed him.  I got frustrated and said I would revisit the deal later.  Well, I got busy and forgot.  Finally, I went back and remembered that he still had m cards, so I told him to just keep the dang Wendzel card and send me the rest of my stuff back.  I got the cards back, so essentially, I traded the Wendzel for the Wendzel.  He could have just asked to keep it, and I would have let him, but he wanted to try to squeeze a Bobby Witt, Jr. or Adley Rutschmann out of me.  Yeah, that wasn't going to happen for a Davis Wendzel.

Needless to say, I won't be sending 50/50s out to this guy again.  Not when we agreed to the deal at the beginning, only to have my stuff held hostage in favor of a "better deal".  I was set to give him a stack of autos, but he wouldn't have it.  Oh well.  I'm bound to find a grapher in Texas who goes regularly, versus the guys I know who don't really graph anymore.