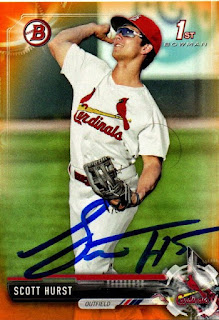 My friend, Dylan, approached me early this year about sending him cards for 50/50s this season.  I was happy to oblige, since it helped me move a bunch of cards.  In the end, I sent him a ton of stuff (probably way too much), but I did get some nice signatures back.  The card that I wanted back more than any other was the above 2017 Bowman orange parallel of Scott Hurst.  I had this card in my Bowman box since I busted 2017 Bowman, and really wanted to get it signed.  Dylan was happy to help, and the card is now in my album. 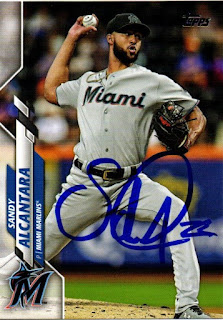 Along with the 50/50s, Dylan sent me some extras that he accumulated along the way.  He hinted at this Sandy Alcantara a few months ago, and then I forgot that it was coming.  I was really happy to get it, though, along with another huge surprise. 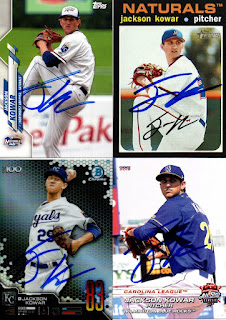 Dylan helped me get some of my Jackson Kowars signed.  I missed him when he came through Kinston, so it was nice to get some of his cards done.  I was especially happy that his Carolina League All Star card got signed. 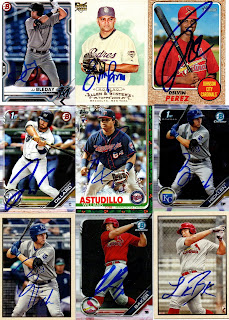 Here is an assortment of what Dylan was able to get signed for me.  The 2019 Topps Holiday Willians Astudillo is a really cool card.  I also like that he was able to get some of my 2019 Bowman Heritage cards done (by Brewer Hicklen and Luken Baker). 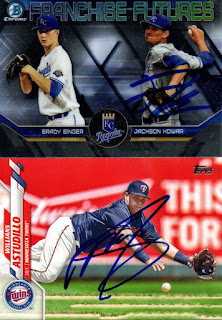 I completely missed Astudillo when I saw Jacksonville at Durham early this season.  He was on the taxi squad early that week, then showed up the next night.  This is after I took his cards out of my book, thinking he wouldn't be on that trip. 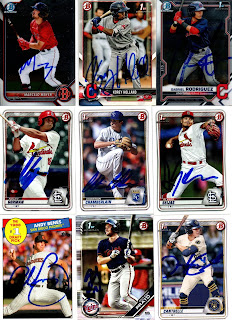 Here are some of the extras that Dylan included.  There might be a card or two from Drake, as the stacks got mixed up a bit. 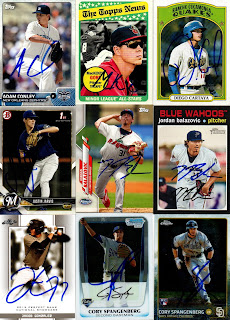 I believe most of these are ones that Dylan sent back, since they still have my tags on the back of most of them. 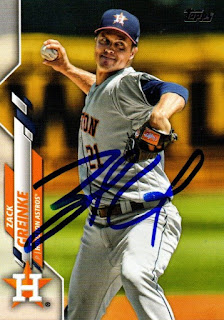 Finally, here's the huge surprise that Dylan included in the package.  I was floored when I saw a Zack Greinke signed card included with my stuff.  I guess he had no problem signing for Dylan while he was on a rehab assignment, since Dylan isn't Pat Neshek.

Thank you so much for taking my 50/50s, and also for the extras, Dylan.  I regret not stopping in Memphis to say hello when we were on our graphing trip out west.  I will try to meet up next year.

Posted by William Regenthal at 5:14 PM