A Ton of Autographs From Drake 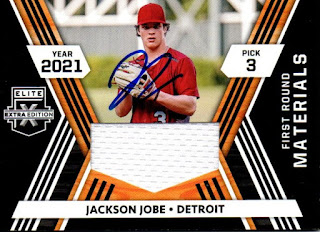 This post may seem like a card/scan dump.  I regret that I didn't break my friend, Drake's shipments up and post them when they came in.  I know Drake was disappointed that I waited to scan and post everything that he has sent me this past year.  I got busy trying to catch up on TTMs and then in-season graphing, I let his stack of cards get super huge.
Still, I finally sat down to scan everything, and even though my scanned froze several times, I finally got through it. 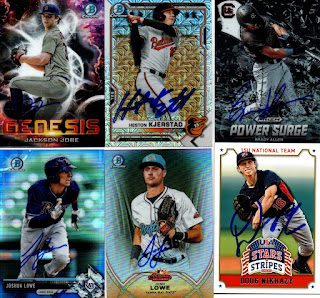 Drake has taken a ton of cards for 50/50s from me over the last two seasons.  He sees some teams in Florida and also Illinois.  He also has been able to see some players on rehab assignments in Florida, and I believe he also went to Tampa for a Rays game.  He was going to get Randy Arozarena and Wander Franco for me, but I don't think he was able to.  I am really happy with the Josh Lowes he got signed.  He has my 2020 Topps Heritage Minors blue parallel still, and that should be coming in the mail soon. 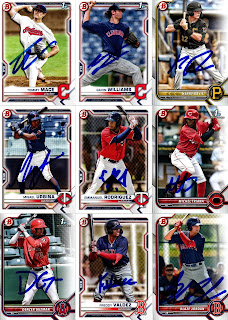 It was really hard sorting the stiff he had sent into some kind of pattern that would make it easy to post and discuss, so I decided to try to put stuff together that was similar, even though they may not all be the same teams.  Drake knocked out a bunch of Bowman products for me.  Several minor leaguers I may not have been able to see, he got them.

That's what appeals to me the most about doing 50/50s with folks.  They take cards from me of guys I wouldn't normally see, and I get them guys that I see.  We swap, and everyone is happy.  It also helps me clear space in my Bowman boxes for new product, and keeps teams that I never see from just sitting there collecting dust. 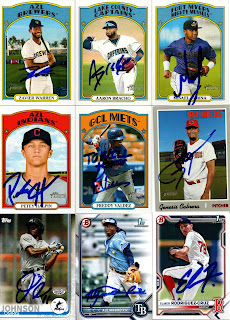 I especially like knocking out 2021 Heritage Minors cards.  I'm not working on the set, by any means, I just like the colorful cards and I also like reducing the stack that I have here at the house. 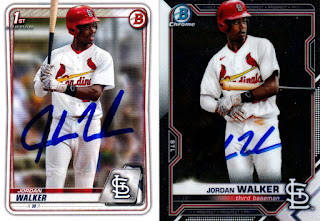 Drake took a couple Jordan Walkers from me that helped reduce the leftovers I had from my trip out west.  Maybe next season, he and I can get together and graph.  I'd enjoy it. 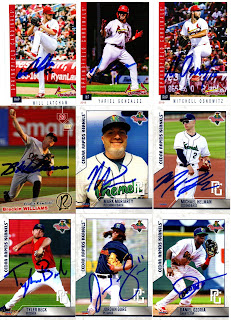 Drake also has helped me clear out some extras that I have here at the house.  He loves doing "blind trades" where he is happy taking any set number of cards and exchanging them card for card.  He doesn't mind obscure players or team personnel, so I try to send him some stuff he wouldn't normally see.  He does the same for me. 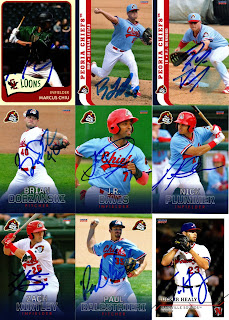 This has put several random team set cards in my album, and since I enjoy the randomness of my album pages, the cards fit right into my theme. 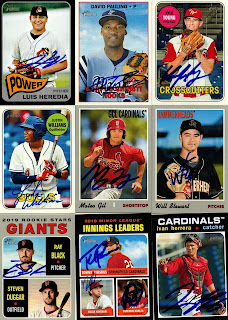 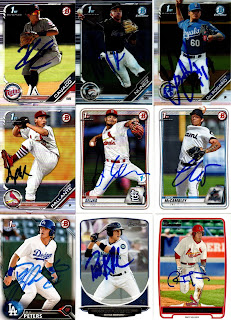 The Bowman cards Drake sent go back to the early 2010s.  I have some from those years, but seeing guys who were in those sets are getting tougher and tougher to see.  I have to go to places like AAA to see some of those guys, or wait until they become coaches. 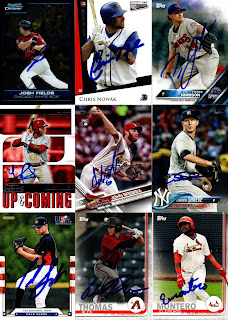 I wonder just how man extra autographs Drake must have, since he sent me a ton. 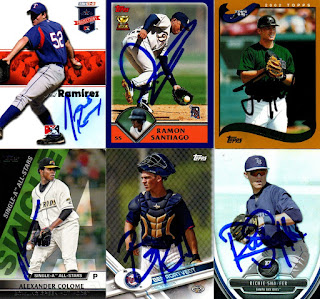 He also included some older Topps cards that I can use to check off of my Topps ledger for some of those early 2000s sets. 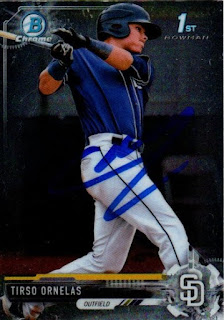 This Tirso Ornelas was one of those 2017 Bowman Chrome minis.  I have seen them around, but never pulled any.  I have a few of them from some former Wood Ducks.

So, Drake really hooked me up with a bunch of stuff.  I hate that it took me so long to scan and post them, but they're finally here, and also have finally been added to my autograph album.

Thank you so much, Drake, for all of the cards, and also for taking all of the 50/50s the past two seasons.

Posted by William Regenthal at 12:59 PM