Some Missed Cards From Drake 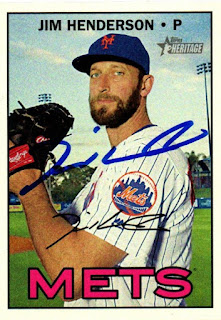 My stack of stuff to be scanned got mixed up a while back, and some stuff that people had sent me didn't get posted correctly.  Some of the cards that got mixed up were part of the blind trade I did with my friend, Drake.  I was able to finally figure out who sent what (pretty much) and am now only days away from being all caught up with scanning. 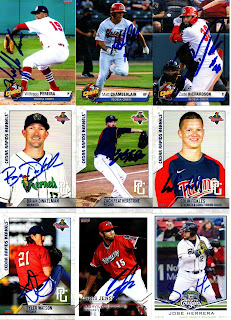 Drake hooked me up with a bunch of cards in this blind trade.  Basically, a blind trade is each of you sends each other a number of cards, the other person matches that number.  It worked out pretty well for the both of us.  Drake did pretty well in not doubling up on guys I had already gotten.  He also sent me a bunch of random team set guys who will look cool in my album. 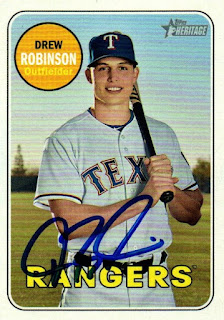 I was really happy that Drake included this Drew Robinson card.  I had tried Robinson TTM last season (or maybe it was this season), but didn't get a card back.  Robinson's story is an interesting one.  He is an advocate now for mental health, as he suffered tremendously with his.  To the point where he tried to take his own life.  He survived, and was able to get a Spring Training invitation from the Giants, without the use of one of his eyes (it was permanently damaged as a result of his attempt).  He is now a mental health coach for the Giants, and his story can be found online.  It is a recommended read.  Click Here for a link to the article. I liked these random cards from Drake, as well.  He definitely added an assortment to the album.

Finally, here are some recent Bowmans that Drake sent along.  I was glad to add these to the album.

Thank you so much for the cards, Drake.  I really appreciate the cards!  I hope you liked yours.

Posted by William Regenthal at 6:17 PM