In collating the Top Ten cards in my collection, I noticed that a common theme existed, the Hall of Fame rookie card.  Of course, most players' rookie cards tend to be their most sought after, but also the Hall of Famers themselves tend to be more valuable as well.  Of course, not all rookie cards are from a player's first year, but it is their first official card.  When you pair a rookie card with a baseball legend, well, you end up with something really special.  That brings us to card number 9 in my Top Ten: 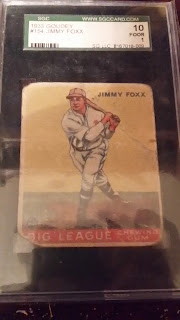 This is a 1933 Goudey Jimmie Foxx that I got in a deal on Instagram a while back.  The card is graded by SGC and is "Poor".  You can see that based on the severely rounded corners and the huge crease in the top right corner.  All grading issues aside, this is a Jimmie Foxx rookie card.  Let that sink in a bit.  Foxx is one of my PCs and one of my all-time favorite Hall of Famers.

The deal itself worried me some, since it seemed so too good to be true.  I got the card for $40 from a guy on Instagram that I hadn't dealt with before.  It turned out that I shouldn't have prejudged so easily, because he was 100% legit and sent the card really fast.  I haven't done any deals with him since then, but this had to have been one of my best deals on there.
Posted by William Regenthal at 2:13 PM