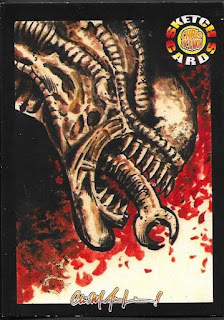 On Halloween, my wife and I took our son to the local comic shop since they were having some Halloween festivities.  We didn't have time to get into our costumes, but they were having a costume party, a bouncy house, free comic giveaways and a comic book artist was there to draw stuff for people.  He was also giving away free sketch cards to people, and also had some for sale.  I picked up a couple that I thought were really cool.  The above Alien (Xenomorph) card was pretty cool.  Since Aliens is my all-time favorite movie, I had to pick this up.  I got this one for free. 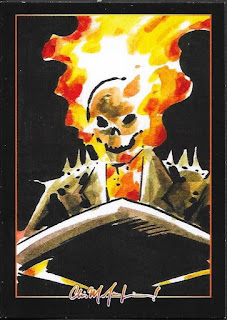 As you can see, the flaming skull really stands out.  When I was very little, we would play a card game in my grandparents' basement on Sunday afternoons.  It was an old Marvel game, kind of like Old Maid, but featured Dr. Doom.  My brothers and I would beg our grandfather to play the game, and would have a lot of fun.  If it was the winter time, Grandpa would build a fire in the fireplace in that basement, and we would all stay down there until Grandma called us up for dinner, or until we would have to go to Youth Group.  We played that Marvel game a lot, until Grandpa taught us how to play Michigan Poker.  Anyway, Ghost Rider always stood out to me, so when I became old enough to read and enjoy comics, he was the hero I went after.  It's funny, he was my favorite hero, and Dr. Doom was my favorite villain.  I'm certain that ties back to the card game as well. 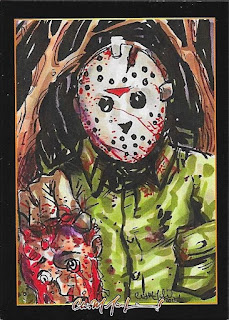 The artist gave me a business card, but I misplaced it.  I believe his name is Chris McJunkin.  I'm sure a google search will bring up his information.  He signed the backs of each sketch card for us, and I also bought a larger print, but that will be put to use later.

I really enjoyed the trip to the comic shop.  I hope they continue to have these promotions.  It seems like Chris really enjoyed it.  He still has a hard time getting interested in reading, but I'm hoping the comics will help.
Posted by William Regenthal at 9:24 PM