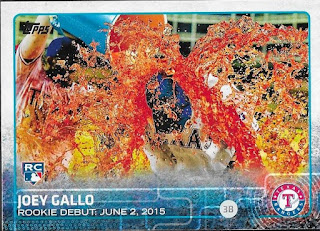 I busted a jumbo box of 2015 Topps Update when it first came out.  The contents of the box weren't really much to be excited about, but the set is pretty nice.  I don't believe I will be putting the set together.  Also, the Orioles in the series are only OK.  I mean, there are All Star cards, and all, but the only Oriole I was really excited to see in the set was Tyler Wilson.  I did pull his base card, so that was nice.  The Darren O'Day card was a good one, too.  I might pick up some of the different versions of it.

As always, there are some really good photographic shots in this set, as seen in the Joey Gallo rookie debut card above.  I think these Gatorade shower cards are really cool.

I was pretty happy with my Update box.  I got the Nolan Ryan manufactured coin card, which is in a pending trade.  I got an auto of Jason Rogers (never heard of him), but it is sold to my friend, Bryce.  I also got a Paul Goldschmidt All Star relic card that I plan on hanging onto for the time being.  I did get a SP card, the sabermetric stats Gerrit Cole.  Not bad.
Posted by William Regenthal at 6:46 PM