I've covered rookie cards, amazing vintage and set building in the previous Top Ten posts.  There was no card I was more excited to receive that the next one on the list.  I was working really hard on building a major vintage set at that time, but I had told myself that I wouldn't ever be able to afford the key rookie card, so my set would likely be incomplete.

It took a cursory look on Ebay one afternoon at the card shop, some nudging from my friend, and I put a bid in.  Little did I know at the time that the card would be one of the crown jewels of my collection.  Card No. 3 in my top ten is: 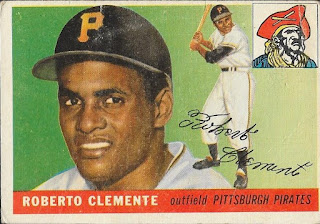 My 1955 Topps Roberto Clemente rookie card.  I placed the bid on the computer at the card shop, but the auction was ending about 30 minutes after closing time.  I raced to my parents' house and begged my mom to let me use her computer so I could watch the end of the auction (since I was still winning).  She let me, but said "If your dad comes in, he's going to want to get on the computer and you'll have to get off."  I took my chances and signed into Ebay.  With about a minute to go, my dad walked in, wondering why I was on his computer.  I told him I was winning an auction and really wanted to make sure I won.  He walked over and saw it was for a baseball card; then he saw the price.  I figured he would tell me how silly it was that I was bidding so high for a piece of cardboard.  What he said next really surprised me, though.  He chuckled and said "I guess we all have our things, don't we?  You should see what I paid for the engine I just bought..."

He walked away, saying he would be back in about five minutes, to which I told him that would be fine.  I ended up winning the auction for this card for about $150.  That was a complete steal, since the book value on the card is exponentially higher.

It isn't mint, but it looks great.  The card now resided with my 1955 Topps set, which I was able to finish about a year and a half later.  I still think it is really cool that my dad got to see me get it, and he understood the importance of my collection to me.  I'll always remember that about this card.  I have met a lot of collectors over the years who's parents either didn't understand or support their hobbies.  I am lucky to say that both of my parents not only understand, but they support it and they each have their own hobbies as well (Dad actually collects a great number of things, from fishing reels to trains to Johnny West figures and more).  This card reminds me just how lucky I am.
Posted by William Regenthal at 5:22 PM