Each of the card on this list were ones that cost me a decent enough amount of money and/or were amazing gifts from friends and loved ones.  Each card is desirable and would be highly sought after by any collector.  The next card on my Top Ten list is one that took me over 20 years to add to my collection.  It is also one card that I was almost willing to pay any price to get it in my hands.  It is also the only card in my Top Ten that came out of the Junk Wax era, showing that there are cards from the late 80s to early 90s that still command value and mystique.  Card No. 2 in my Top Ten would be No. 1 in any collection, but it is supplanted here, but is still an amazing piece: 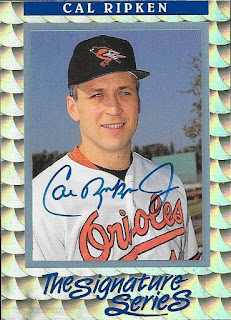 My 1992 Donruss Elite Cal Ripken auto card was one that I wanted to add since it was announced to be able to be pulled out of 1992 Donruss packs.  I can't even begin to count how many 1992 Donruss packs that I opened in hopes of adding this card to my collection.  I had a chance to get one at the 2012 National, but declined, believing that I would be able to find one cheaper than what I found there.

I made it my mission to get this card at the 2015 National and I was able to leave Chicago with it in my hands.  I dropped $300 on the card, but in the end, I was super satisfied with it.  I had walked clear across the Donald Stephens Center looking for it, until I found a vendor who had it.  My excitement probably cost me a few bucks, since he wasn't willing to come down on the price any.  It didn't matter.  I wanted the card so bad, I was willing to pay up.  The hunt for the card was a welcome side-quest at the National and made it a very enjoyable time.

The auto is on-card and is still share after all these years.  It is also the only signed card in my Top Ten.  I guess it shows how much I value vintage and rookie cards.  Still, Cal was my first PC and my first baseball hero.  I doubt I will be able to add any Ripken card that means more to me than this one.  As amazing as it would be to pull this out of a pack, I was happy with being able to find it when I could afford it, and bring it home.
Posted by William Regenthal at 3:06 PM