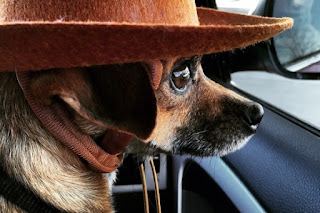 In August, I lost my cat, Jericho and was very devastated because of it.  Today, I learned that my younger brother, Andy's, dog, bruiser has a ruptured disc in his spine.  He got the injury a couple days ago when he fell after jumping off of Andy's bed.  He is doing ok, but will require surgery to correct the problem.  Otherwise, he will have a long rehab that will likely change his quality of life, forever.  Poor little guy can barely move, and now has to be carefully transported so that he can go outside to do his business.  He will have to stay in his crate for at least a month (unless Andy can afford to get the surgery done).

I feel really bad for my brother.  When Jericho passed, it was really quick, so I didn't have to see my friend in any real pain (save from that last bath), but with Bruiser, at least he has a good chance of being ok.  I just hate that the surgery will cost a young college-aged kid thousands of dollars.  I called him when I found out, and gave him some ideas, such as starting a GoFundMe page, or asking for a couple estimates from veternarians and seeing about financing plans.

Andy and his girlfriend took my advice and started a GoFundMe page for Bruiser's surgery, so I'm hoping that helps.  He's a cool little guy, who has been over to visit a couple times now. I hope he will be well enough to come and visit again, soon!

I'm not asking anyone for donations, but if you ARE interested, here is a link to Andy and Camryn's (his lady-friend) GoFundMe page.  Good luck, Bruiser!