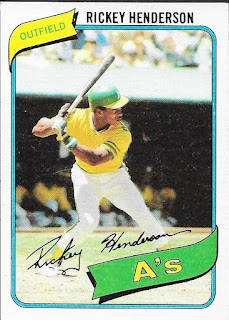 I completed a trade recently with my friend, Dylan from Virginia when I sent him a Rafael Devers auto that I pulled from a pack of 2015 Contenders baseball.  In return, he hooked me up with this really nice Rickey rookie.  I had an extra one of these before, but traded it away.  This one is in much better shape, even though it didn't scan all that great. 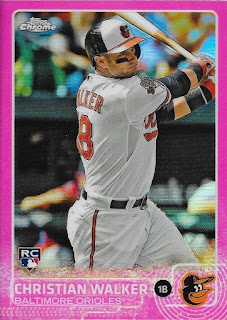 Dylan sweetend the deal with this 2015 Topps Chrome Christian Walker pink refractor.  This is a nice card to see in person.  I found it a bit odd that it wasn't serial numbered.  I thought for sure that the pink parallels were numbered.  Oh well.  It is still a nice card. 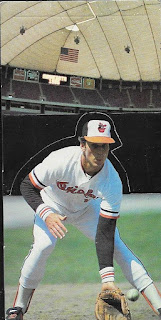 Finally, Dylan surprised me with this Cal Ripken standups card from 1985 Donruss-Leaf.  It is an '85 All Stars standup, and as you can see, it features Cal inside the Hubert H, Humphrey Metrodome.  I don't think I had this in my collection until now.  I think I would know, especially since this is an elongated card, and it would stand out.

Thanks so much for the trade, Dylan!
Posted by William Regenthal at 5:33 PM