You don't often hear baseball cards referred to as works of art.  However, before 1957, most baseball cards looked more like painted images rather than actual photographs.  Cards like ones from the 1953 Topps set are a prime example, and they remain some of the most aesthetically pleasing of all-time.  When fashioning my Top Ten list, one of the first cards I thought of is one I have had for several years and it remains one of my favorite cards to look at, and show off.

It is placed well within my Top Ten, and would be high on anyone's list, so, here it is: 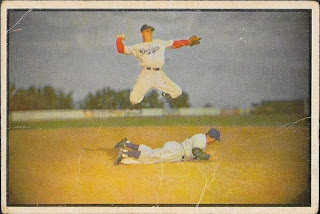 Card No. 6 is my 1953 Bowman Color Pee Wee Reese.  As you can see, the card is far from mint.  There are surface creases in the top left and bottom right of the card.  However, it still catches the eye right off the bat.  It is a "Turn Two" card, and probably one of the best of all-time.

I picked this card up back in 2009 or 2010, back when I was close friends with someone who was a huge Dodgers fan.  I was looking for a nice vintage card to get him and I discovered this one.  I liked the card so much, I wanted one, too!  I was able to find one for $50 and another for $55, so I ended up buying both.  This card has, like I said above, been one of my favorite cards in my collection since then, and it doesn't take much to wonder why.

Upon further review after I purchased the two cards, I found that I got major steals both times.  It is very difficult to find any versions of this for under $100, let alone two of them.  This card, while it represents one of the better-looking cards in my collection, it also is a prime example of the luck I have had in "sniping" cards off of EBay.
Posted by William Regenthal at 9:09 PM