Like I said yesterday, a common theme of my Top Ten cards is the Hall of Fame rookie card.  It wouldn't be a true Top Ten of my cards if it didn't include some players who I PC that are near and dear to my heart.  Another common theme is "vintage".  I am a huge fan of vintage cards, especially Topps.  Also, many of my favorite cards are ones that I "invested" a significant amount of money in, at least significant in my eyes.  This next card is the fisr huge card purchase I had when I jumped back into collecting as an adult. 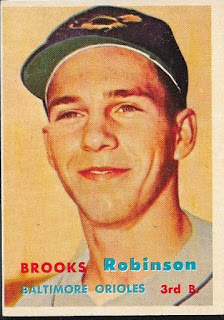 Card number 8 on my Top Ten list is the 1957 Topps Brooks Robinson rookie card.  This card was one that, at the time, I had felt that I would never get a chance to own.  I was used to operating on a very low budget, and being satisfied with pulling good cards from packs.  After I got back into the hobby in 2005, I set my sights on a Brooks rookie that I could afford, and after a little bit of time, I landed this one in an Ebay auction for around $150.00.  That was, at that time, the most I had ever spent on a baseball card.  As you will see, I have since surpassed that with some of the other cards on this list.

What can I say about Brooks that I haven't already said on this blog?  I have met him a couple times now and he is just a gem of a fellow.  Always the class act, I am proud to be able to say that I am a super collector of Brooks.  Adding this card to my PC was, at the time, such a huge addition as far as PC cards goes.  It still remains one of my favorite all-time cards.

I have had the opportunity to add other '57 Topps Brooks Robinson rookies to my collection, at prices cheaper than what I paid, but I never jumped on them for whatever reason.  I imagine that I will add some more of this card to my collection, because I like it so much.  It is just a cool-looking card.
Posted by William Regenthal at 7:17 PM