We are halfway through my Top Ten list, and I have shown some pretty amazing cards, so far.  There have been some great rookie cards, a sick patch and some really sweet vintage.  Each one of the cards on the list is something that is pretty amazing.  Card No. 5 isn't any different.

I am a huge fan of patches, like I said before, and a unique patch makes them even better.  I also enjoy low numbered cards, because, well, I guess because that's what we are told to do.  Regardless, the next card on the list is in a well-deserved spot and it is all because of the relic and the super low numbering.  So, here we are with card No. 5: 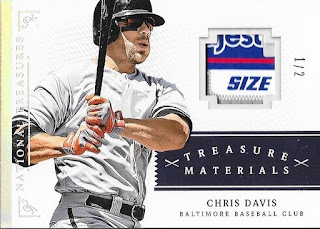 This is a 2014 Panini National Treasures Chris Davis relic numbered 1/2.  The relic is really cool because it is part of the laundry tag from Davis's game used uniform.  I have another card that is in my Davis PC that has a piece of laundry tag, but it is numbered much higher than this one.  I also apparently know where the 2/2 is, but as of today, he still isn't willing to part with it.

I got this card off of Ebay, but I don't remember what I paid.  That's probably a good thing, I do know that I considered this a huge steal.  I feel like I paid only around $50 for this.  Maybe a little more, but not much more.

I have spent a lot of time on my Davis PC this year, and I have some really great cards to show for it.  It is only fitting that one of them was able to make it into the top five of this list.
Posted by William Regenthal at 9:33 PM