Trade With Kalib From Cubs Cardboard 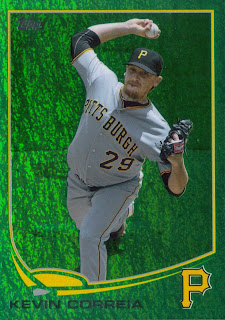 My 'Help Me Out' post really worked.  I got several emails from folks who were wanting in on some of the excess stuff that I have been trying to clear out.  One such person who contacted me was Kalib from the new blog 'Cubs Cardboard.'  Kalib sent me a nice package that included all sorts of Orioles and some 2013 Topps Emerald parallels that I am suddenly amassing.  He sent me 8 of them, so by my math, I now have 43.  I need to go through them and start making sure I am not duplicating anything.  Also, I know I owe a couple folks some inserts in exchange for their emails.  I haven't forgotten, so I will be getting back into the swing of things after finally putting my family issue behind me. 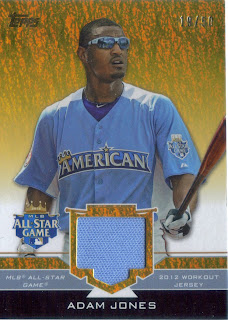 The coolest card in Kalib's package by far was the above Adam Jones All Star relic from 2012 Topps.  It is a golden parallel, so it is numbered to 50.  It looks awesome in person, just so you know.  I really love this card and can't wait to get it top loaded and inserted into my Jones PC. 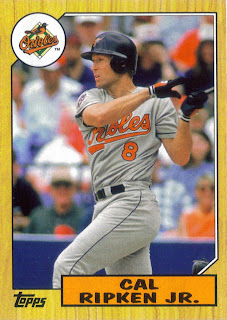 Surprisingly, I did not yet own this Cal Ripken 2012 Topps '87 mini (at least that I know of).  It looks really cool, even though the mini concept is wearing on me. 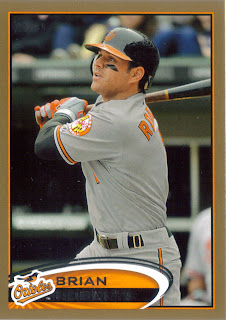 Also, it was nice getting a new Brian Roberts for the PC.  I sure hope he can bounce back from the last few disappointing seasons he has had.  When healthy, Roberts is a catalyst at the top of the order.  We'll see, though, if he can remain healthy. 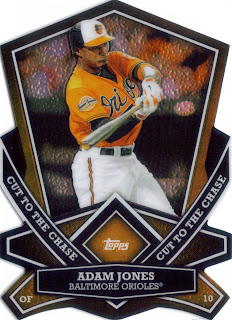 Finally, I got this awesome Adam Jones Cut to the Chase card.  I think I have a pending trade with someone for another of these, which, if I do, don't worry, that trade is still on.  I love these cards and won't mind duplicating my efforts there.

So, thanks for the trade Kalib!  If you all haven't already, head over to his blog and follow him.  He seems like a really good guy and I am definitely happy to have someone to send my Cubs stuff to now.
Posted by William Regenthal at 6:06 PM