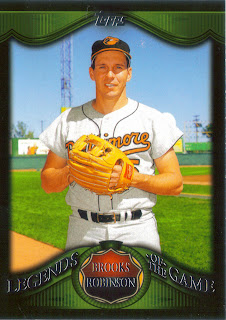 I recently did a small trade with Chris over at the wonderful blog 'Nachos Grande' in which I sent an assortment of Barry Larkin cards to him.  In return, he sent me a few Orioles.  I had several of them already, but that's ok, it will give me some stuff to trade with other Oriole fans that I know, so it is all good.  I don't think I blogged the above 2009 Topps Legends of the Game Brooks Robinson before.  I might have, but I don't remember, so there it is.  I liked that insert set when it came out and I still like it today.  I really enjoy seeing past starts on today's products, so I'm hoping Topps will continue on with that (and hey, its another avenue for me to increase my Brooks/Cal/Feller/Foxx PCs. 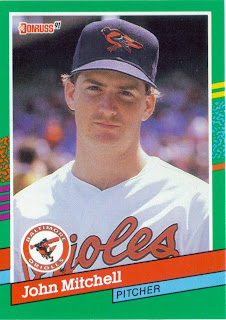 One thing I like about sending people stuff is seeing which cards I sent them that actually make it onto their blogs.  I bet Chris didn't think the above John Mitchell 1991 Donruss would make the cut.  Well, it made it because I had no clue who Mitchell was.  I looked him up on Baseball-Reference.com (one of my favorite sites, by the way) and it appears that this 1991 Donruss came at the end of Mitchell's brief career.  He went 6-6 with a 4.64 ERA for the O's in 1990, but did not pitch in the majors in 1991.  It looks like he went to the Seattle organization and pitched for their AAA team in 1991.  He wound up in Independent ball later on in his career before calling it quits in 1998.

Always interesting looking up some of these 'unknowns.'  Thanks for the trade, Chris!
Posted by William Regenthal at 5:30 PM

Anytime I can dump off some of my extra 1991 Donruss cards I'm happy ;) Seriously though, glad you liked the cards and thanks for the trade!