Another Trade With Weston 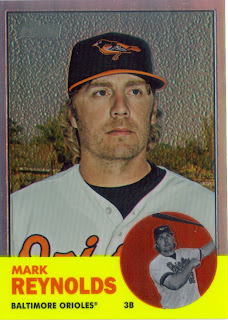 I got home yesterday and discovered a mailer in my mailbox from my buddy Weston.  In it was a multitude of cards of Orioles and a couple others for my player collections.  Above is a really nice 2012 Topps Heritage Chrome Mark Reynolds.  I really like it and it is unfortunate that Reynolds won't be with the O's this year, but I won't be missing his strikeouts and I think Nolan Reimold can stay healthy and contribute as big a bat as Reynolds with a higher average and less Ks. 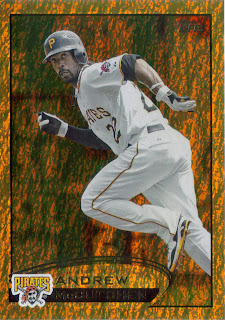 Probably my favorite non-Oriole, Weston hooked me up with this 2012 TOpps Golden McCutchen.  McCutchen is a great player who I really hope can sustain his recent success.  He had a good year last year, but looked like he was gassed after the All Star break. 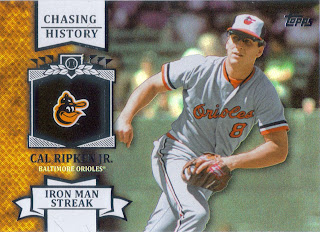 Weston's known me long enough to know that it is a special day when I can get a new Cal for my PC.  This one is the retail exclusive foil version of the Chasing History.  This was probably my favorite card from the package, but all of the cards were sweet. 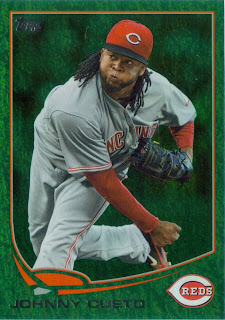 Because Weston is a really nice guy, he hooked me up with 5 Emerald parallels.  Now I have 35 total of the 330 from Series One.  Over 10% complete.  Wooo! 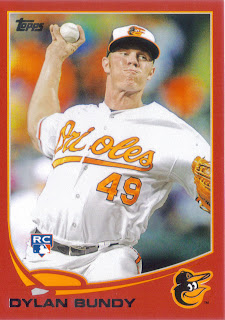 Also, because Weston is a nice guy, he hooked me up with a parallel of Dylan Bundy, so I now have his base card, Emerald and Target Red Parallel.  Nice. 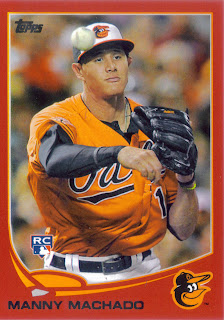 Did I mention that Weston was a nice guy?  He also included the Target Red parallel of Manny Machado.  I now have Machado's base, Gold parallel and Red.  Awesome.

Thanks for the trade Weston.  I hope you like the package I sent in return!
Posted by William Regenthal at 10:23 PM

I love that Ripken Chasing History. That whole set so so cool....