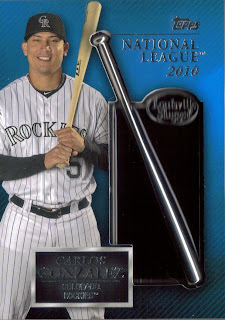 Ok, I busted my 3 Jumbo Boxes that I purchased from Crane's Cards (the same guy I get my cases of ball cubes from) last night while Scott (from Mr. Baseball-Scott) and Andrew (Andrew's Baseball Cards) watched via webcam.  I decided to break up my stuff into a couple categories, you know, so I could milk a couple more posts about them.  So, here are the hits from my 3 boxes.  Most of these are definitely for trade, because, as you will be able to see, I didn't pull anyone from my PCs as far as hits go.  If I do trade them, I would like Orioles hits from 2013, if you have them.

First off, I wanted to show the manu-hits from this year, which I really like.  I pulled three Silver Slugger award cards.  I believe these were seeded 1:34 packs or something like that, compared to 1:32 for the Cy Young or MVP cards.  Funny thing is, I got 2 of the same card, the below Jim Rice.  One is already committed to a trade with Scott, a Red Sox fan.  I like both of the cards and the subject of each (CarGo above and Rice below), but I would have been much happier pulling the Eddie Murray Silver Slugger or the Cal Ripken MVP. 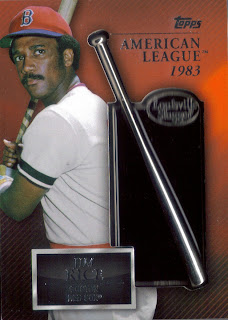 Something else about these cards is: They're BRICKS!  They are so thick and heavy, I think card shops are going to have a tough time with pack searchers. 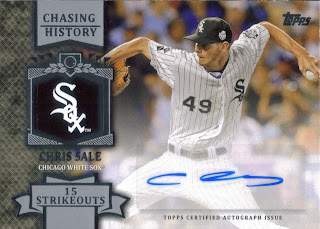 The autos I got were really decent, to tell the truth.  All are young stars that I would be willing to hold onto unless someone came at me with a pretty sweet deal.  I got the above Chris Sale, whose auto isn't much to look at. 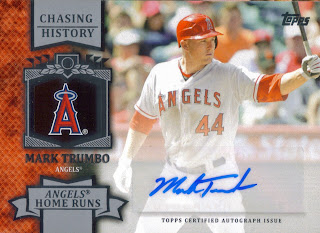 Of the 3 autos, the above Mark Trumbo is one I'm most likely to hold onto.  I probably would have to be blown away to part with it, as he is a solid player. 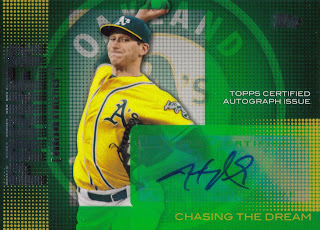 The above Jarrod Parker is really nice also.  I'm less inclined to hold onto a pitcher, as their careers can be so up and down, but he had a really good year last year.  I love the incorporation of the A's colors in the card, I think they really pop, if you ask me. 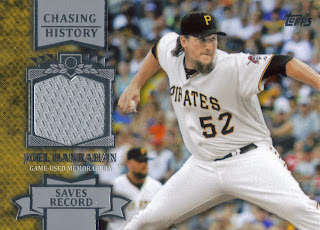 Now, onto the relics.  I was pretty underwhelmed with these.  Joel Hanrahan was just traded to the Red Sox, so Yuck. 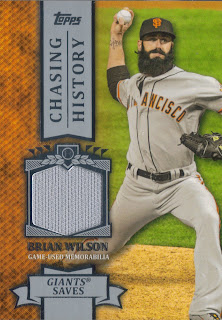 The Brian Wilson is kind of cool, but he might not be able to come back from his injury.  The beard is definitely a novelty, though.  I know a couple Giants fans who might be in the market for it and if they aren't, my son will probably like it.  I'd be more inclined to trade it, though. 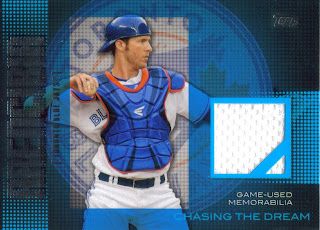 Finally, here is the last relic card and the last hit, a J. P. Arencibia jersey relic.  No, that is not a pinstripe on the jersey, it is just a diagonal strip of cardboard that makes no sense to me.  This one is definitely up for trade.

So, there you have it.  My hits from 2013 Topps Series One.  I'll go ahead and tell you, I would be very willing to trade some of these for Orioles parallels (you know, green/gold/black/platinum/camo/pink/silk, etc).  I plan on making rainbows of Chris Davis, Orioles Wild Card, Manny Machado and Dylan Bundy.  So, I have that to look forward to.

Tomorrow, I plan on posting a look at some of the inserts I pulled.  Stay tuned.  Also, if you are interested in a trade, please comment, for sure, then email me so I have your email address.  I feel like replying directly to email works better for me than replying via comments.  Also, a few of you have emailed me recently about trades, if I haven't followed up yet, please email me again with an address to send stuff to so I can add it to my notebook.

Thanks for reading guys!
Posted by William Regenthal at 4:52 PM

Man, I could use that JPA, but I just put my red Manny Machado on ebay and its already selling.

I do have a mini Adam Jones and a gold foil Ripken Chasing History...

Man, actually you did much better than you told me you did! Sale, Trumbo, and Parker are all real solid pulls! Great break!