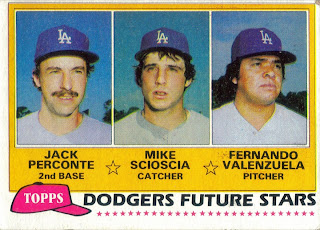 You see, 1979 had the big RC of Ozzie Smith; 1980 had Rickey Henderson and 1982 had Cal Ripken.  1981 had Kirk Gibson and Valenzuela.  Great players in their time, but not Hall of Famers.  The 1981 design was actually really nice.  The hat with the team name and matching color.  I once bought a pack of 1981 Topps at a LCS in Winston-Salem in the mid 1990s because to me, it was an 'old' pack.  Inside that pack, I pulled a Kirk Gibson RC.  That card was lost over the years, but I replaced it not too long ago from another bargain bin.  However, I always had a soft spot for 1981 Topps.  I have even considered building that set, even though I already own a complete set.  Just for the thrill of piecing it together.  I don't know.  Maybe one day I will.

Great card. I recently purchased the 81 Topps set for $25 too. And guess what? It came in a binder.

Anyways... it'll never be worth big money, but it's still a great set. Now if only I can get my hands on an 81 Topps Traded set.